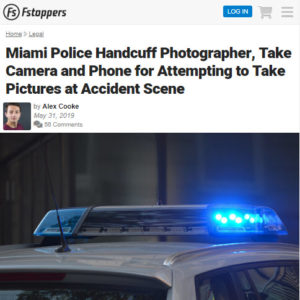 Cross-posted from Fstoppers
[by Alex Cooke]

On May 25, a Miami photographer was handcuffed and had his equipment seized when he attempted to take photos of an accident scene.

The photographer, Jacob Katel, was driving to Miami Beach when he came across a motorcycle crash. Katel then parked his car and got out to photograph the scene (Katel has been a freelance media photographer for a decade). Within seconds of exiting his car, Katel says an officer began approaching and yelling at him and after a brief conversation, handcuffed him and took his phone and camera.