By ASMPMarch 26, 2020Current News
No Comments 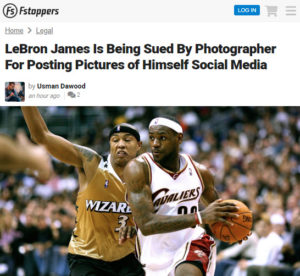 Cross-posted from Fstoppers
[by Usman Dawood]

In a previous article I discussed how supermodel, Bella Hadid, was being sued for posting pictures of herself on Instagram. I also talked about how this is seemingly becoming quite a frequent occurrence. I believe this is mostly due to the fact that most people don’t seem to understand how copyright laws work.

NBA superstar LeBron James is facing a $150,000 lawsuit for posting a picture of himself on his social media sites. Photographer Steve Miller filled the suit against the star on the 17th of March for an image that was posted back in December last year. The image in question, currently remains up on social media and the comments that it is generating, really paint a picture of ignorance.