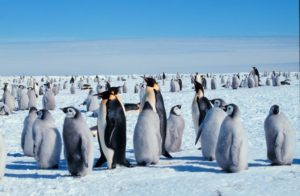 Cross-posted from the Center for Biological Diversity
[Contact: Sarah Uhlemann]

In an agreement filed in federal court today, the U.S. government promised to determine whether to propose Endangered Species Act protections for beloved but imperiled emperor penguins by July 2021.

The agreement was prompted by the Center for Biological Diversity’s lawsuit against the Trump administration last July for failing to consider penguin protections.

“We won’t let emperor penguins be another casualty of the extinction crisis,” said Sarah Uhlemann, international program director at the Center. “The Trump administration wants to pretend the climate crisis doesn’t exist, but here in the real world, emperor penguins need and deserve the fullest protection. We can’t let these iconic, incredible animals disappear.”