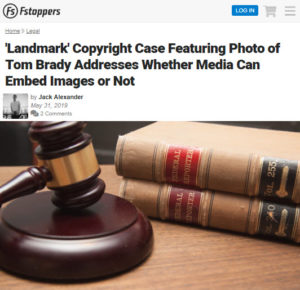 Cross-posted from Fstoppers
[by Jack Alexander]

A conclusion has been reached in what is described as a “landmark California case,” where a photographer sued numerous media outlets for embedding his photo of Tom Brady within news articles. The photographer originally posted the picture on Snapchat, from where it was then posted by internet users on Twitter, the posts of which the media used as their embeds.

As the story goes, photographer Justin Goldman posted a photo of Tom Brady and Celtics general manager Danny Ainge to Snapchat, back in 2016. It then spread across the internet, raising speculation that Brady was helping the Celtics recruit basketball player Kevin Durant. Naturally, the photo ended up on other social media sites, such as Reddit and Twitter. From here, media outlets covering the speculation proceeded to embed the tweets with the image into their articles.

This week, the major copyright suit, which has been raising questions about the way media companies do business online in regards to image usage, was voluntarily dismissed after a settlement was allegedly reached with Time Inc. and with consent from the last remaining defendants, Oath (formerly Yahoo!) and Heavy.com.