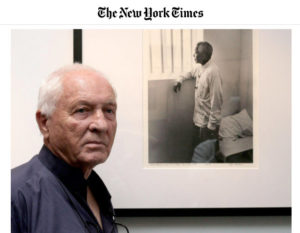 Cross-posted from The New York Times. [By Alan Cowell]

“‘When I arrived in South Africa in 1950, I found two societies which were developing in parallel without any communication between them,’ Mr. Schadeberg said in remarks accompanying “Jürgen Schadeberg — Photographies,” a collection of images published in France in 2006. ‘There was an invisible wall between these two worlds.’

‘The Black world was becoming more and more dynamic on the cultural and political front,” he continued, “while the white world seemed isolated, stuck in its ways, so colonial and totally ignorant of the life of the blacks.’

As a newly arrived foreigner, he said, ‘I could easily move from one world to another.’

At Drum, which had become known as a mouthpiece of resistance, Mr. Schadeberg became the lead photographer and artistic editor. He was widely credited with mentoring young Black photographers who could not afford their own cameras and were denied access to jobs in the white-run media.”

“From 1964 onward, Mr. Schadeberg worked in Britain, Spain, Africa, the United States, Germany and France before returning to live in South Africa in 1985. His most striking images from that period include photographs showing the demolition of slums known as the Gorbals in Glasgow.”