By ASMPJuly 27, 2020Current News
No Comments 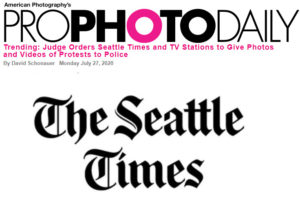 On May 30, photographers from the Seattle Times and local TV stations documented an unruly crowd that had broken off from peaceful protests against police brutality and racial injustice. The crowd smashed windows, set police cars on fire and looted businesses, notes The Washington Post. Many of the perpetrators escaped arrest. But the Seattle Police Department had an idea how to try to find them: They demanded all the images shot that day by journalists on the scene.