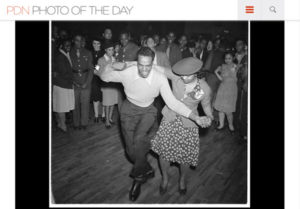 A new exhibition at Seattle’s Museum of History & Industry (MOHAI) highlights the career of Al Smith, a photographer who documented the local jazz scene and the city’s African-American community in the mid-20th century. Titled “Seattle on the Spot,” after the name of Smith’s photography business, the exhibition tells the story of the photographer’s life and work, focusing in particular on the 1940s and ’50s, when Smith was ever-present in the music scene and at community events, photographing with a Speed Graphic camera. We see Smith’s images of patrons and musicians—such as Duke Ellington and Vivian Dandridge—at Seattle’s “bottle clubs,” African-American music establishments that were BYOB because selling alcohol by the drink was illegal at the time. We also see photographs of parades and weddings, youth football teams and women’s social clubs, personal pictures of family and friends, and other scenes from Smith’s community, which revolved around Seattle’s Central District.