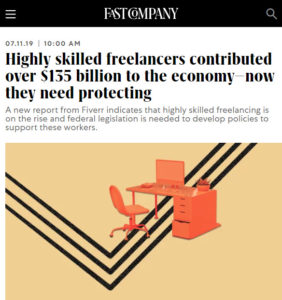 Cross-posted from FastCompany
[by Brent Messenger]

The United States is in the middle of an independent labor explosion–despite outdated government studies that suggest the contrary. The continued rise of on-demand platforms and the gig work they generate has pushed what was once a niche conversation on labor economics into the mainstream. Policy makers and businesses alike want statistical confirmation of what they know anecdotally to be true: the digitization of work has brought about a meaningful shift in the way people are working.

Studying how the labor market is divided is incredibly important as it provides the government with a more complete picture of the economy. Ideally, this picture shows not only areas of growth and expansion, but it also identifies the subsets of workers that are making this growth possible so they may be supported with the appropriate policy and economic development initiatives. This is particularly critical for the highly skilled freelancer population in the U.S.