He Captured the Magic of Miami Through His Camera Lens. Ray Fisher Has Died at 96 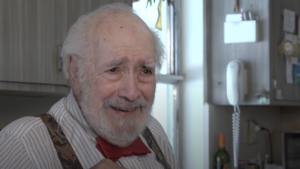 Cross-posted from The Miami Herald
[by Caroline Ghisolfi]

Ray Fisher was never one to blend in with the crowds. With his memorable red bow tie, old-fashioned hat and 35-millimeter camera, Fisher was always at the center of Miami’s most glamorous star-filled events, snapping iconic pictures that landed the posters teenagers cherished.

His pictures also filled the country’s top magazines and made every major television network.

He was there in the 1950s when Frank Sinatra played the Fontainebleau Hotel’s La Ronde Room, and in the ‘60s when Muhammad Ali dethroned Sonny Liston in Miami Beach and Academy Award-winning actress Liza Minnelli made her debut in Coconut Grove.