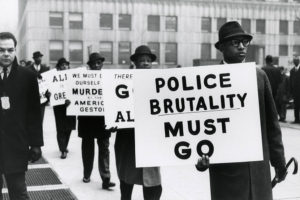 Gordon Parks never met George Floyd but they knew the same struggle, they knew the corrosive toll of racism, they knew what it meant to live under the veil of suspicion and violence from people charged with protecting their lives. Gordon Parks and George Floyd had something else in common: the city of Minneapolis. George Floyd left Houston for the Twin Cities in 2014, searching for a better life just as Gordon Parks had 86 years earlier when he migrated from Kansas. Both men encountered racism there, one enduring its sting long enough to use it as motivation for a career in fighting injustice and another who tragically never got the chance. We were particularly saddened to see fires, possibly set by organized racists, that damaged the Gordon Parks High School in St. Paul on the second night of protests over George Floyd’s death. We are utilizing every available resource to assist the school in its recovery. Just as Gordon was not stopped by racism, racism will not impede the work of continuing his legacy.

In the words of writer Jelani Cobb: “Gordon Parks believed that it was the act of bearing unflinching witness to the wrongs of poverty, of inequality, of racism and violence were our first steps to changing them. It is a terrible validation of his ideas that the world knows George Floyd’s name because of the images that documented his final moments. The camera, he once wrote, was his ‘choice of weapons’ in the battle for justice. It was a wise choice.”

The Gordon Parks Foundation was established in 2006 to protect and preserve his legacy as an artist and a humanitarian. A great deal of his legacy is within our archives in the tens of thousands of images he left behind. But, as the past two weeks of demonstrations have reminded us, another part of it cannot be stored in a temperature-controlled room; it’s in the streets, it’s in the chants of people marching to ensure that George Floyd’s death is the last of its kind.