Going Once, Going Twice… and SOLD! 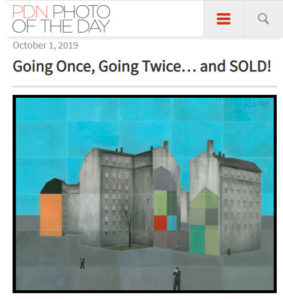 Cross-posted from PDN Photo of the Day
[by Samantha Reinders]

The first issue of Aperture, a quarterly journal devoted to creative photography, launched in San Francisco back in 1952. Founded by a small circle of photographers and critics — Minor White, Dorothea Lange, Ansel Adams among them— Aperture’s stated mission was to communicate with “serious photographers and creative people everywhere, whether professional, amateur or student.” Teacher, writer, and influential photographer Minor White served as the first editor.

Fast-forward 67 years and Aperture is still up and at it. It’s no longer just a magazine though. The Aperture Foundation today is a multi-platform publisher and center for the photo community whose mission is to serve as “common ground for the advancement of photography”. One would think that the likes of White, Adams, Lange and their cohort would be proud, and somewhat mystified, at what Aperture gets up to in today’s world.