George Floyd, Gordon Parks, and the Ominous Power of Photographs 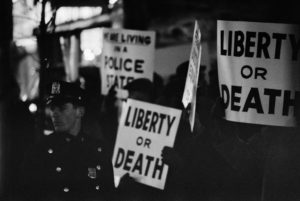 Editor’s Note: The late Gordon Parks was an ASMP Member.

Cross-posted from Aperture
[by Deborah Willis]

As I reflect on photography and protest, I see it as my life in America from a lived experience to an act of memory. I am troubled by the images I’ve seen over the last two weeks, and I have been asked—by various people—what these images mean to me. Black death has been photographed, broadcasted, painted, recorded, tweeted, and exhibited for the past ninety days. It has been nine days since a teenager posted footage of George Floyd’s murder. It has been nine days of collectively watching George Floyd’s last moments of life, seeing a man struggling and crying, while a white police officer digs his knee deeper into Floyd’s neck, the officer’s left hand slipped casually into his pocket. I watched in horror as the other police officer stood guard, protecting his fellow officer, while the person behind the camera screamed and pleaded with the officers to stop. I heard others begging for his life as George Floyd pleaded “I can’t breathe” over and over again.

The video went viral! Each time I watched the news, my heart cried. It is recorded thanks to cell-phone imaging and surveillance cameras and, because of the camera, we see history repeating itself. Just this past March, Breonna Taylor was killed in Kentucky; in February, Ahmaud Arbery’s death was recorded in Georgia, and not until weeks later did the national news media report his tragic death. COVID-19 killed 100,000 Americans, and their names appeared on the local news and some of their portraits were published in the newspapers. Activists, community members, students, first responders, essential workers, government and city officials, family members, and others have used the images to make change happen because of a history of injustices.