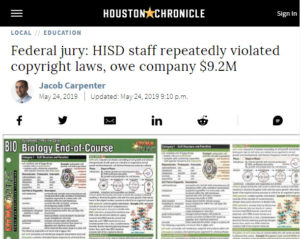 Cross-posted from The Houston Chronicle
[by Jacob Carpenter]

In the winter of 2013, when the principal of Houston ISD’s Westside High School suggested making copies of colorful study guides recently purchased from a small Austin-area company, an English teacher responded that there was a “glaring disclaimer about copyright” at the bottom of the documents.

The teacher suggested the guides, which cost nearly $2,000 total, should be handed out during class and picked up before the final bell. But when the school’s principal brushed aside the copyright concerns, the teacher fell in line.

“I’m ok with violating it though…lol,” the teacher wrote in an email, according to a lawsuit.