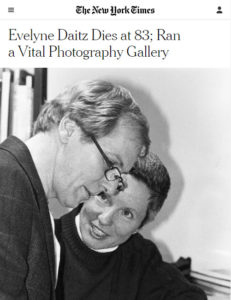 Cross-posted from The New York Times.  [By Neil Genslinger]  “Evelyne Z. Daitz, who worked with Lee D. Witkin at his pioneering Witkin Gallery, generally regarded as the first commercially successful photography gallery in New York, then took it over after his death in 1984 and ran it for another 15 years, died on Oct. 31 in Manhattan.”

“She was known for an adventurous programming spirit. During her tenure the gallery exhibited established photographers like Jill Freedman, Evelyn Hofer and Mario Cravo Neto, but it also showed the work of numerous lesser-known ones.”