Do You Look Like an Ogre in Video Calls? Me Too. Fix It With Simple Tips From Portraiture

By ASMPMarch 26, 2020Current News
No Comments 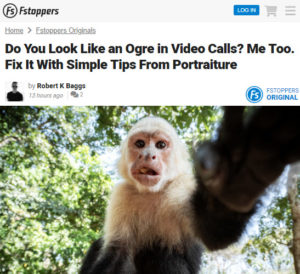 With most of us on lockdown to some degree, the number of video calls for work and pleasure have increased exponentially. So, you might as well work out how to make yourself look halfway passable, rather than the cave-dwelling ogre you might without forethought.

I don’t like being in front of the lens — any lens — and I avoid it most of the time. I like being behind the safety of the camera body, face partially obscured. (Maybe that’s why I liked the GFX 100 so much: it obscured even more of my head.) But, with COVID-19 has come an influx of video calls with my family, friends, and even some work conferences. Like most, I naturally hold my camera at a low angle and started the first call without much forethought, to be greeted with a repugnant rendering of my appearance. Video calls are for all intents and purposes selfies, so it’s time to take notice of those teens, as they’ve usually figured out techniques for looking good in them.

The unlucky recipient of my video feed could likely see up my nose — which appeared four times the size — as chins and bags under my eyes sprouted through creepy lighting. I recalled my grandad’s first attempt video-calling me, in which I got to see the perspective of his face that a hair on his chin might have had. I realized that it was a common problem the more calls I was on and I can fix it. So, here’s how to give the best representation of yourself in video calls. Please note, if you’re not photogenic — as is unfortunately the case for me and many others — this will help, but it can’t polish… let’s get to the tips.