Daniel Wolf, Collector and Lover of the Great Outdoors, Has Died, Aged 65 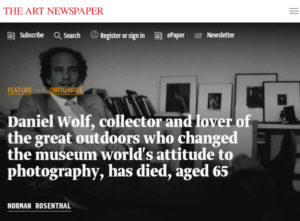 Cross-posted from The Art Newspaper. [By Norman Rosenthal]

“Arguably Wolf’s greatest achievement was to pull together, in secret, from some dozen or more existing collections, a unique museum holding of photography, old and new, for the J. Paul Getty Museum and its director, John Walsh. Photography became one of the most high-profile departments of a museum otherwise devoted to ancient and classical Western art before 1900. Amongst the collectors Wolf dealt with were Sam Wagstaff and the great Parisian dealer/scholar André Jammes. Wagstaff himself sold to Wolf—without at the time knowing his collection’s destiny—more than 25,000 extraordinary images, among them works by his two young protégés, Robert Mapplethorpe and Gerald Incandela, both of whom he introduced to Wolf. The quality of the Getty collection can surely never be equalled. The Getty was the largest lender to The Art of Photography 1839-1989, the 1989 exhibition at The Royal Academy, London, celebrating the 150th anniversary of the invention of photography, with Wolf as lead curator. At the time this was, within the RA, a controversial subject for a show—with many members still doubting that photography was a legitimate art.”

Daniel Wolf, collector and lover of the great outdoors who changed the museum world’s attitude to photography, has died, aged 65