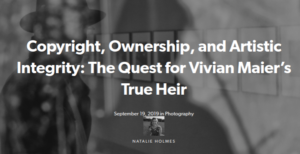 Cross-posted from Pixsy.com
[by Natalie Holmes]

David Deal first found out about Vivian Maier back in 2011, while he was still in law school. A former professional photographer, he was captivated both by Maier’s work and the discovery that she’d used the same camera as he once did: a Rolleiflex twin-lens reflex. “I know how difficult it is to shoot with that camera and how skilled she must have been to get the photographs that she did,” says Deal of that initial encounter.

The story of Vivian Maier is by now well-known. A prolific photographer living in Chicago, Maier worked as a full-time nanny to make ends meet while snapping shots of street life throughout the 1950s, 60s, and 70s – works which are today considered “among the most remarkable of the 20th century.”