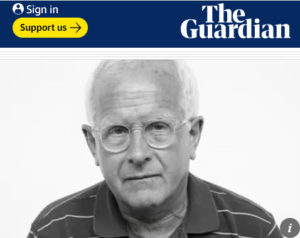 Cross-posted from The Guardian.  [By Shaun O’Hagan]

“The British documentary photographer Chris Killip has died aged 74. He had been suffering from lung cancer. Killip was best known for his seminal series, In Flagrante, which he made in the industrial north-east of England between 1973 and 1985. He later said of the photobook of the same name, published in 1988: ‘History is what’s written, my pictures are what happened.’

Of the influential generation of British documentary photographers that came of age in the 1970s, Killip was perhaps the most hard-hitting and the most humanist. ‘Chris is without a doubt one of the key players in postwar British photography,’ said his friend and fellow photographer, Martin Parr, who also describes In Flagrante as ‘the key photobook about Britain since the war.’”