By ASMPDecember 2, 2019Current News
No Comments 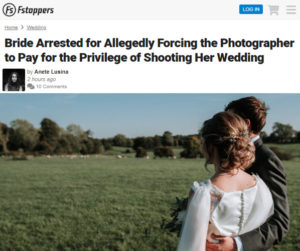 We’ve seen several cases this past year where couples have expected wedding photographers to work for free in return for the highly valuable exposure bills, but this time a bride is raising the bar by asking a photographer to pay her for the privilege of shooting her wedding. What can go wrong?

This story begins on Reddit, where one user posted their account of what happened. A bride-to-be, who was also their friend, approached the photographer with a proposition. It entailed the photographer paying the bride $50, which would allow the photographer to take photos throughout the wedding day and then sell them to people who may want to purchase them. The bride’s attempt to justify this working arrangement came down to “that way we can use the money for the wedding and you still might get paid”.

The photographer refused, but kindly offered to cover the wedding for just $50. This led to bride being upset and crying, and going as far as calling the photographer a “bad friend” and that she would do the same for the photographer if roles were reversed. Unfortunately, the story doesn’t simply end here but continued with the bride and her friends and family harassing the photographer by leaving angry messages.