Balancing Photojournalism with the Right of Refusal: The Debate Continues 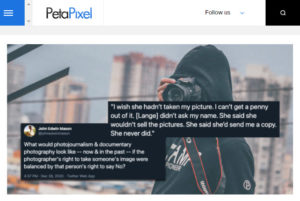 Cross-posted from PetaPixel
[by Jaron Schneider)

A University of Virginia history teacher published a tweet asking what photojournalism and documentary photography would look like, now and in the past, if the photographer’s right to take someone’s image were balanced by that person’s right to say no.

In October of 2020, the New York Post published a controversial OpEd calling street photography a form of “gender-based violence” (and this piece argued against that perspective). A recent Twitter debate continues to question the norms of documentary photography against the right to refuse having a photo taken.