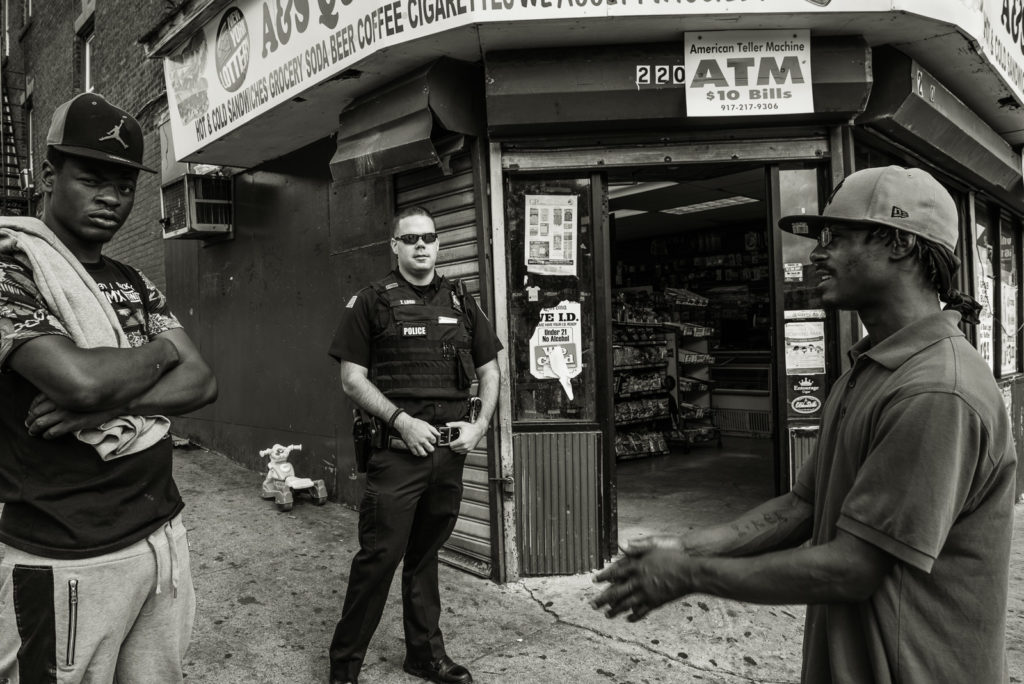 Cross-posted from Flaunt.  [By Audra McClain]  “The name Daniel Sackheim is probably one you’ve seen before. It’s graced the screen of beloved television shows like Game of Thrones, The Walking Dead, Lovecraft Country, Ozark and the big screen with the film The Glass House, all with ‘director’ attached to it. Or maybe you’ve seen it in The X-Files: Fight the Future, Law & Order, and House tacked to title ‘producer.’

Sackheim’s talent for being behind the camera doesn’t end with the moving image. His work as a fine art photographer shows his ability to tell a story with a film crew. Drawing inspiration from film noir, his street photography aims to access the subconscious while exploring narratives hidden behind the shadows, making viewers ponder over the events that led to the pressing of the camera’s shutter camera’s shutter.”

Cross-posted from Hyperallergic.  [By Renée Reizman]  “Despite its reputation as a gridlocked metropolis, Los Angeles has been steadily expanding its subway system for years. For the past three decades, photographer Ken Karagozian has spent his days in the tunnels, documenting construction. Now, you can see Karagozian’s breathtaking snapshots of infrastructure coming to life in Deep Connections, on view in Downtown’s historic transportation hub, Union Station.”

Inspired by landscape photographer Ansel Adams, Karagozian mostly shoots on black-and-white film. It blurs the extensive timeline covered by his photos, turning our attention away from period clothing or outdated technology and onto the spectacle itself, the contrast of dazzling white pipes cutting across freckled gray terrain, or towering steel machines shrinking the construction workers that stand beside them.”

Cross-posted from aPhotoEditor.   [By hvolpe]  “How did the idea come about, aside from necessity?
When I was approached about the cover, I was heading to NYC for a job. Since Lin wasn’t available to shoot while I was there, I suggested that I shoot plates up and around Washington heights in a David Hockney style. The request from Jennifer and Raul was to come up with a collage idea that brought them together even though the weren’t.”

Cross-posted from BuzzFeed News.  [By Pia Peterson]  “His photos are unfiltered, raw, sometimes sweaty — and beautiful. They capture not only history but the sheer energy, talent, and power of these artists. The images serve as a look back at music in Chicago in the 1980s and ‘90s, both at venues and on the street, and in spots that no longer exist, such as George’s Music Room, an iconic record retailer on the city’s West Side.
When Renata Cherlise, the founder of Black Archives, began working in partnership with Getty Images earlier this month, she wasn’t sure what she would find in the 11 million-image collection. ‘He has an incredible archive through Getty,’ Cherlise said. ‘When I came across Boyd’s images, I don’t think I had ever seen them before. I was immediately drawn to them, and it had me wanting to learn more about him.’”

Cross-posted from blind.  [By Brigitte Ollier and Jonas Cuénin]  “Stephen Shore’s latest publication, Steel Town, released by MACK, depicts the fragility of the region in the United States known as the Rust Belt, devastated by the closing of steel mills in the 1970s.”
“Steel Town by Stephen Shore has just been released by MACK. The book is infused with a sense of austerity, as well as a kind of sadness the source of which is hard to pinpoint. Shore’s color photographs seem both strange and familiar, a bit like a long-forgotten tune. The American photographer does not try to hide the reality; on the contrary, that’s why he’s there. Reality is what motivates this photo story first published in 1977 in Fortune Magazine under the title ‘Hard Times Come to Steeltown.’ Aged 30 at the time, Stephen Shore (b. October 8, 1947), now the author of over 40 books, admits that this was the ‘the most extensive [editorial commission] I had done for a magazine to that date.’”

Cross-posted from blind.  [By Sophie Bernard]  “While journalists and publishers are familiar with the Roger-Viollet Agency, a new exhibition now allows everyone to learn that Hélène Roger-Viollet, the woman who founded the agency 83 years ago, was also a photographer. She had set out to document the world.”

“In 1936, while she was vacationing with her husband in the principality of Andorra, the Spanish War broke out. Fearless, the couple decided to cross the border to document the conflict. Their images were among the first to be published across the globe. This historical chance would change Hélène Roger-Viollet’s destiny. As she explained years later, this episode made her aware of the importance of photography: ‘We had reached this transformative moment when images took on great importance in the world.’”

Cross-posted from LenScratch.  [By Aline Smithson]  “Photographer Mary Beth Meehan has a legacy of considering the complexity of communities and reminding us of our humanity through her portraits and interviews. For her newest project and book published by the University of Chicago Press,  Seeing Silicon Valley, she joined forces with Silicon Valley culture expert Fred Turner to give us an unseen view of the heart of the tech world.

When considering the population central to this American mythology, we might consider the characters of the television show Silicon Valley–rag tag techies that carry dark under eye circles from long days in front of a screen without sunshine and a small cluster of visionaries who have gotten very rich from technology. But the reality of place is very different. Behind this image lies another Silicon Valley, one segregated by race, class, and nationality in complex and contradictory ways. Its beautiful landscape lies atop underground streams of pollutants left behind by decades of technological innovation, and while its billionaires live in compounds, surrounded by redwood trees and security fences, its service workers live in their cars.”

Cross-posted from New York Times Magazine.  [By Jenna Wortham]  “Deana Lawson’s regal, loving, unburdened photographs imagine a world in which Black people are free from the distortions of history.”

“The portrait of Ms. Bell is part of a new body of work that Lawson is making for a series of upcoming shows, including one at the Guggenheim Museum, which awarded her the Hugo Boss Prize last year, the first time a photographer has been chosen to receive the prestigious award. She has created a vernacular as recognizable as a Gordon Parks or Dawoud Bey photo or a Lorna Simpson collage. Lawson’s images are singular for their sense of privacy. Her subjects retain an air of mystery, and even secrecy, despite how much appears to be revealed. ‘She’s not only looking at portraiture, but she is exploring the history of performance in photography,’ Deborah Willis, an artist and professor of photography and imaging at New York University, told me during a recent phone call. Willis says Lawson is at the forefront of a larger movement of Black artists and photographers who are ‘putting together new ways of seeing and presenting Black people.’”

Cross-posted from AnOther.  [By Ashleigh Kane]  “The Austin-born, New York-based photographer’s second book is a culmination of the last five years of ‘Black love, photography and history’, that he and his community have experienced.”

“There are a lot of friends in the book, longtime friends or collaborators, and also a networking community of Black artists in Austin. There are street portraits, but I really wasn’t interested in looking deeply into the lives of others. Even though that is there, I hope that the process of it was not too intrusive into others’ lives the way that documentary photography can be. That interested me, using the people who are so close to me, rather than relying on strangers for metaphor.”