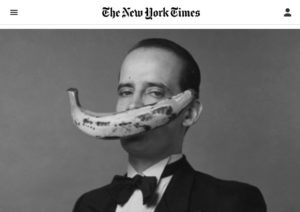 Cross-posted from The New York Times. [By Katharine Q. Seelye]

“Adál, who moved from Puerto Rico to New York as a teenager, created art that was often bitingly satirical and politically subversive.

Adál Maldonado, an influential Puerto Rican photographer and artistic provocateur who explored the psychological and cultural fallout of the Puerto Rican diaspora in New York, died on Dec. 9 in San Juan. He was 72.”

“For more than 45 years Mr. Maldonado — who went by just Adál professionally, a moniker suggested to him by the photographer Lisette Model — worked in multiple mediums across various genres. His art was often infused with bitingly satirical humor and a subversive political message.

It has been exhibited at the Museum of Modern Art, the Metropolitan Museum of Art and the Museo del Barrio in New York as well as at the Musee d’Art Moderne de la Ville de Paris; some of his photographs remain in their permanent collections.”