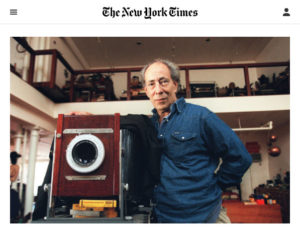 Cross-posted from The New York Times. [By Neil Genzlinger]

“Spurning commercialism, he made thousands of one-of-a-kind prints that for decades he largely kept to himself. Then came a show at the Whitney.”

“All around me I saw people who became cynical and bitter when they didn’t get the recognition they thought they deserved, and I wanted to be free of that,” he said. ‘I wanted only to do my work, for myself, without any commercial influences.’

That work consisted not only of taking photographs — of the demolition of the old Penn Station in Manhattan, of rooftop scenes in New York, of seashells, of underbrush — but also of printing his own images, using aged paper and chemicals that he mixed himself. Often the pictures were shot with cameras and lenses that he had made.

Mr. Rose had his own darkroom processes that enabled him to imbue black-and-white images with hues of pink and blue, orange and gold.

‘I think of myself as partly an alchemist,’ he said.”