A Photographer’s Surreal Flight Home During the COVID-19 Pandemic 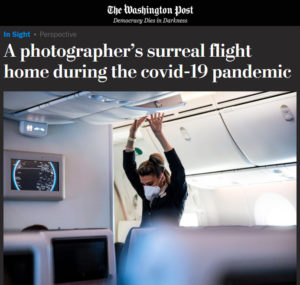 Cross-posted from In Sight
[by Sharon Pulwer and Haley Hamblin]

For many photojournalists, boarding a plane for a long-haul flight is a routine part of the job. On March 17, Sharon Pulwer experienced some far-from-routine sights when she flew from Newark Airport to her family in Tel Aviv with El Al airline. Both airports, usually busy international hubs, were quiet. Absent of rushed travelers, the surreal situation became apparent; small numbers of passengers stood in pairs or alone. “Seeing with my own eyes the same sights in two airports that are almost 12 hours’ flight away from each other was surreal,” Pulwer said.

El Al’s flight from Newark to Tel Aviv is regularly packed, but the flight on March 17 was noticeably empty. Most passengers had about three seats to themselves and were able to keep more than six feet from each other while wearing masks and gloves. Some of the passengers seemed worried and shifted uncomfortably in their seat if anyone sneezed or coughed. Many discussed the news. Others were trying to keep things light and joked that they should enjoy the human contact and engage in as many conversations as they could, before having to go into the mandatory 14-day quarantine for those who enter Israel.