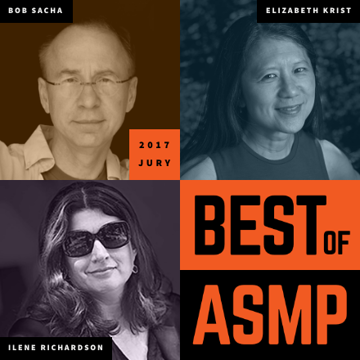 Thanks to all ASMP members who submitted entries! The judges have completed their work – reviewing more than 650 entries – the largest amount in our history of this particular contest!

The winners have been revealed on the Best of 2017 Contest Results Page!

Message from the Executive Director

I am very excited about the momentum we’ve gained since we began accepting entries on September 15th! I want to thank those of you who have already entered and to make everyone aware of the turning point this Best of ASMP Photo Contest represents. I also want to encourage the rest of you to get in the game!

As we’ve been rebuilding ASMP, it was necessary to shift our focus to improving tools and infrastructure. Now that our new tools are in place, this Contest is what allows us to shift the ASMP spotlight onto our members. That’s why this is a members-only contest. This Contest will become the basis for the revival of the Bulletin in the spring of 2018. The Bulletin has always been an important representation of the quality of your work for both prospective art buyers and members. Please take advantage of this opportunity to be featured and celebrated.

The work our winners share with ASMP during this Contest will also become the basis of an aggressive marketing campaign in 2018. This is a unique opportunity to be part of our visual history and promotional messaging. I encourage you to show your best work and be part of the rising tide that will lift the boats of all ASMP members!

BEST OF ASMP 2017 will allow for the unlimited submissions by members of SINGLE IMAGES  or a SERIES of images:

Special thanks to these sponsors for donating prizes to our Swag Bags:

Bob Sacha is a director, cinematographer, editor, teacher and photographer and, above all, a collaborator on visual journalism projects. In 2014 he shot the video for the Guardian US team project that won the Pulitzer Prize for Public Service, a National Emmy for New Approaches to News and Documentary Programming, a Webby and the first gold medal ever given by the Society for News Design. He teamed up with Blue Chalk as the the director of photography for the New York Times series, Living City, about New York’s infrastructure. Bob has had a long career as a staff photographer at the Philadelphia Inquirer, a contributing photographer at both Life and National Geographic Magazine and a freelancer for more magazines than remain on newsstands. Read Bob’s full bio.

Elizabeth Cheng Krist was a long-time photo editor with National Geographic. She curated the Women of Vision exhibition and book, as well as an auction for Christie’s. Krist has judged grants and competitions for POYi, Critical Mass, PDN, Aftermath, the State Department, SDN, Visura, Light Work, and the RFK Journalism Awards. With her colleagues she has won awards from POYi, Overseas Press Club, and Communication Arts. She has reviewed portfolios for the New York Times, PhotoPlus, LOOK3, and Palm Springs. Krist has taught for Santa Fe Workshops, Syracuse University, CUNY, Columbia University, and Kalish. She has served on the board of the Eddie Adams Workshop, and last year spoke at GeekFestDC. Read more about Elizabeth.

Ilene Richardson is a Clio-award winning innovator who was among the first to bring A-list directors to the web, including Mark Pellington (Arlington Road, The Mothman Prophecies) and Diane Keaton for Barnes + Noble. Her credits include “Art of the Heist” for Audi as well as two seasons of Real Simple on PBS as Executive Producer. She has produced thousands of videos for the web and social media, hundreds of television episodes and dozens of national broadcast spots. Her experience spans over 20 years of writing, producing, and directing in broadcast, corporate, experiential and web based video production. See Ilene’s LinkedIn profile.