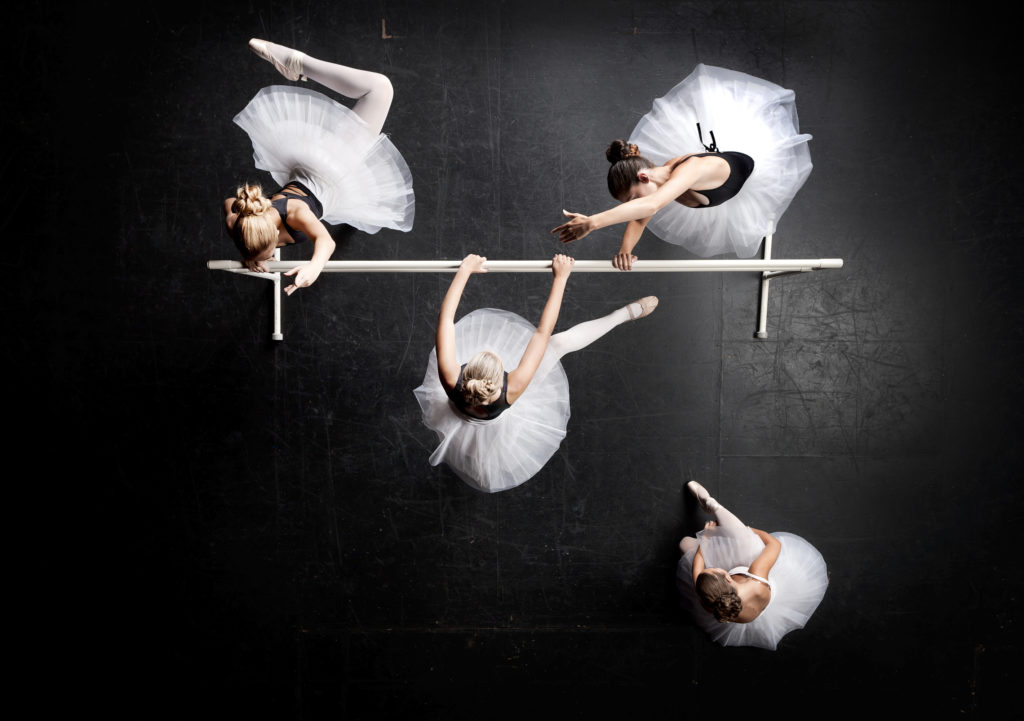 “I love the challenge of working on location. I shoot in the studio a good amount – but find the role of problem solving when in an environment is more exciting. This includes making a studio on location. There’s something very satisfying in creating a mood through lighting that doesn’t exist in reality.”

ASMP: Can you provide some background on your winning photo?

Ian Spanier: This was part of a marketing campaign for Danskin. We shot for the day various settings at The Red Bank Theater in NJ. Creatively, the direction was meant to feel more like captured moments- as opposed to scripted, posed portraits…even though in reality we would be posing our subjects. At the time, we didn’t plan to shoot from overhead, and we certainly were not prepared for it. The set-up of the dancers warming up was not really working from ground level as we were essentially shooting in a black box. A black stage with a black background. The light was right- but the environment was not helping. The creative producer and I discussed it, and we came up with the idea to shoot from above. Without a proper rig, my assistants and I used a combination of superclamps and a tripod head attached to one of the steel beams meant for curtains that were hanging above the stage. I climbed up a ladder, and fired my camera from my laptop via a tether in Lightroom. It was not the prettiest rig – but at the end of the day it got the job done.

IS: My client wanted something different for the clothing advertisements. We discussed the beauty of classic NYC or Paris ballet classroom shots from the 40s and 50s. Only hiccup was that we would be shooting in a dark theater, so we had to create the mood of that lighting artificially.

ASMP: What type of setting inspires you the most?

IS: I love the challenge of working on location. I shoot in the studio a good amount – but find the role of problem solving when in an environment is more exciting. This includes making a studio on location. There’s something very satisfying in creating a mood through lighting that doesn’t exist in reality.

IS: I am a big believer that lighting is as important to the success of a photograph as the subject is. Our job as photographers is to tell a story- whether that is an artificial event or real moment. I like to think that my use of light helps convey a mood or atmosphere that evokes the emotion I am trying to capture. In this case, we were trying to create a caught moment- even though it was completely orchestrated.

IS: I have always been a fan of the original masters of photography and often find myself referencing back to photographers like Brassai, Bresson, Weston, Avedon then moving into the work of Harry Benson, Bruce Davidson, Robert Frank and Albert Watson. As far as contemporary photographers I would say Andy Anderson, Anders Overgaard and Platon are my favorites.

IS: I am primarily a Canon user and have been most of my career, Profoto for lighting and I haul all my camera gear in Lowepro cases and bags.

IS: Although photography has been in my life since I was six years old, I tried like hell to be anything but a photographer. No matter where I was in life though – it always came around. After college I worked as a photo editor in magazines, ultimately becoming the director of photography at a number of titles. Regardless, though my job was on the hiring side – I continued to shoot, and was always taking in as much about how to shoot and understand light as I could on set. Thanks to my job ending when the media company I worked at filed Chapter 11, I finally came to the realization that I should be making images full time rather than part time shooting and part time assigning. It was really the kick out of the nest I needed – and I’ve not looked back since.