Stephen Wilkes’ “Day to Night” series, which he began in 2009, is instantly recognizable: images of public spaces and landmarks, photographed from a single angle over the course of 15 hours, show the transition of day to night. It takes months to seamlessly piece together the final images, which include locales such as the Coney Island boardwalk and the National Mall for President Obama’s 2013 inauguration. In 2014, he traveled to London, Paris and Tel Aviv to continue his work.

“Day to Night embodies a combination of my favorite things to photograph: people and epic landscapes and the fleeting moments throughout the day and night,” Wilkes says. “As this series has evolved, I discovered that the photographs began to highlight a form of emergent behavior within the daily life of each image.” 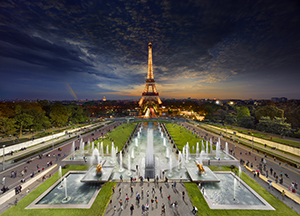 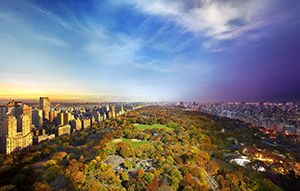 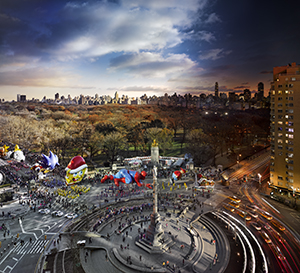 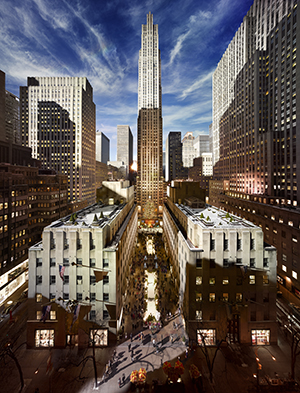 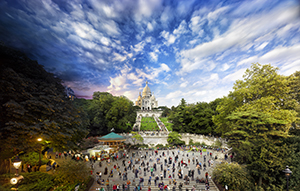 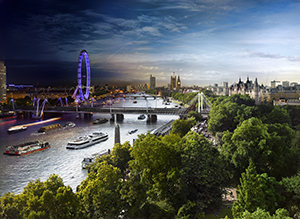 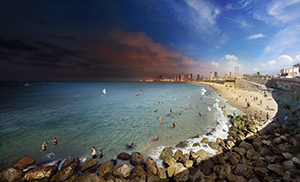 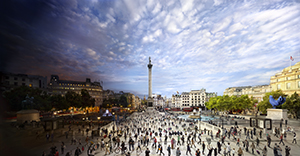 ASMP: How has the “Day to Night” series changed or evolved since you started in 2009?

Stephen Wilkes: It started as a very abstract concept, something that had never been explored before. Once I figured out a solution in terms of a process, it evolved to where it’s like muscle memory: I don’t have to think about the process as much, and as a result, the stories & narratives within the photographs are getting much deeper. I’ve been trying to incorporate history in the actual events that I’m photographing whenever the opportunity presents itself. I’ve been exploring areas that I thought were somewhat impossible. For example, when I started doing the National Parks portion of the overall series, I had to think about how to see night because there are no streetlights, cars or activity that you would see in a city. So I began working with moonlight during long exposures.

The project has certainly evolved in terms of possibilities. I’m currently looking at a potential shoot in the Arctic. The beauty of this project is the endless possibilities that I can do with combining day and night in one place. It has been seven years since I began this journey, and I’m still feeling very excited about it. When I reflect on when I first started the series to where it is going now, I believe you can really see it evolving and maturing.

ASMP: What do you look for when selecting a location? Which locations have you photographed in the past year?

SW: I start with things that are part of our collective memory, the places that are familiar to everyone. The challenge, of course, is to go into a place like that and actually show it to people in a way that they’ve never seen it before. I look for a very specific perspective, what I call a “human narrative,” in all of my pictures, and that allows me to tell a story within a photograph, as the day moves from morning to night. That is really one of the most important elements in what I do, because as much as it could be interesting and beautiful just seeing the landscape change in color and light and time, the idea of seeing people and the context of humanity within these scenes is a really huge element in this work. I’ve always described what I do as, “I’m a street photographer from 50 feet in the air.” So that’s what I look for-a place where I can capture a narrative, and the breadth of a physical place in one picture.

I just finished shooting the Regata Storica in Venice, where a historical regatta race has been held since the 1500s. I also recently did a shoot in the middle of the Serengeti in Tanzania, Africa, during peak migration of the animals. We were actually in the middle of the park and not a reserve, where the government gave me permission to go off-road. I set up my camera from the rear side of a watering hole, photographing everything that captured my eye over a 26-hour period. The most magical part of this experience was watching these competitive species all share this single resource, water, without so much as grunt at each other over it. It was a really enlightening experience. This image will be included in my upcoming exhibition at Bryce Wolkowitz Gallery in New York City, which opens on November 5th, and runs through January 9th, 2016.

I recently had the good fortune of expanding the “Day to Night” series to national parks. These images were made possible by a grant from National Geographic, and will appear in the January 2016 issue. We are currently working on a book of the series that I hope to have in fall of 2017.

ASMP: How do rhythm, patterns and repetition play a role in the series? How do you bring out these aspects of the images for the viewer?

SW: In terms of rhythm, I describe it using a scientific term called “emergence.” This is when individual species move as one cohesive group. For example, when you see a school of fish while scuba diving and you put your hand out to touch them; the individuals don’t separate, they move away from you as a group. When I get above cities, I’m seeing that type of rhythm and movement inherently as a part of what is the street energy or flow. There’s a subtle communication between the cars, busses and people-it’s all moving and flowing, a controlled chaos, very much the way schools of fish or even ants move.

In terms of patterns, or structure, I’m always thinking about what is going to create balance and harmony within my pictures. The time vector becomes the way that I do that, where day begins and where night ends is a very critical element in what I do. In a way, these images are time capsules. I’m exploring the fabric of time, and visualizing it in a single image. I’m trying to capture a day in history, all within a single image-what I believe were the best moments to happen in this place in a single day. In that regard, I really have to be accurate in my representation of the best moments of that day. I always come to my shoots with an open mind, because as a street photographer, I never know who’s going to step in front of my camera at any moment or what’s going to show up. That’s part of the joy of what I do: the uneasiness of not knowing what’s going to happen on that given day.

ASMP: You note it takes up to 15 hours to photograph one location. Approximately how many photos total are you shooting, and how many are blended together in the final image?

SW: 12 to 15 hours is average. With the national parks it’s more like 24 to 30 hours. I’ll shoot on average between 1,500 and 2,500 images. The National Parks are a bit more. We will edit down to about 50 of the best moments, and that’s roughly what we use to merge the day and night together.

ASMP: Besides seamlessly blending the images, what is your main objective in post-production?

SW: When some people see my prints in person, they actually have an emotional response to the color in my work. I’m showing the changing of time over many hours in one image, the color of light changes as you look. It creates a visual contrast in your perception of color, because you’re seeing these two discordant worlds brought together seamlessly. The great challenge & beauty of this series is creating a harmony that feels natural.

ASMP: For this project, what do you consider your most valuable tool?

SW: If I didn’t have an incredible team of people working with me, I could have never achieved a project on this scale. There’s never just one thing, but several integrated parts. My wife, Bette, who produces all of these shoots, and manages every detail. I’m so blessed to have her in my life, and she allows me to continue to grow as an artist. My retoucher, assistants, printers, agent and galleries all play a critical role in bringing my ideas to life as well. Of course, on a technical side, without the ability to use Photoshop and to work digitally with these images, I would never be able to do this project. Finally, I would say my passion to see: if I didn’t love to constantly look, I’d never stay out there for so many hours at once.

ASMP: When did you join ASMP? What do you find most valuable about the membership?

SW: I joined back in the 80s, when I was an associate of Jay Maisel. I was also involved with the board during those years. We learned so little in college about the business of photography, and ASMP taught me my value as a photographer. ASMP became the Bible; it was always the sounding board for the way things were being done: how to do delivery memos, how to review a purchase order, how to look at contracts, understanding copyright. It was really amazing for me to get that as a young photographer; it’s a game changer when you decide to become a professional. ASMP really brings you up to speed on what the industry has done in the past, and it gives you context for the future, so you can make intelligent decisions.

SW: I can’t say there’s just one relationship; it’s the idea that we can share work & experiences with others and that there’s camaraderie. ASMP encourages the exchange of ideas, of having photographers share their vision, to inspire and be inspired, and to meet colleagues whose work we admire. This type of exchange is so fruitful and important, and ASMP has the unique ability to bring us all together.