Originally beginning his career as a sports photojournalist, Robert Seale has always been interested in aviation. He began his series on pilots and astronauts to honor those who he believes are true heroes. The resulting work depicts the subjects set against majestic skies, and backlit by the setting sun — in effect, memorializing them. 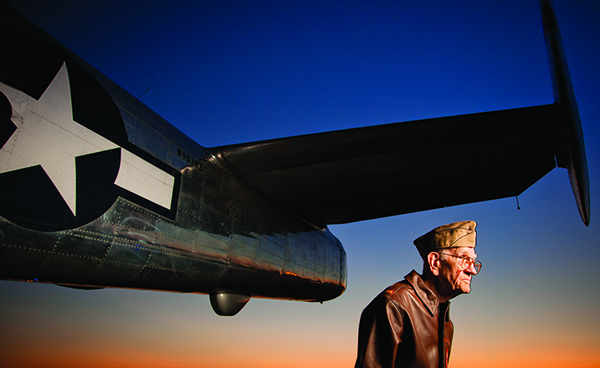 “After shooting professional athletes for years, it seemed that there was a disproportionate amount of hero worship, and I thought it would be useful to actually highlight some real heroes,” Seale explains.

Robert Seale: I’ve been a professional photographer since I graduated from college in 1992. I worked as a staff photojournalist at several newspapers, before a ten-plus-year stint as a staff photographer at a national sports magazine, The Sporting News. I left my staff job and incorporated my own business in late 2006. I don’t shoot a lot of game action these days — there’s really no professional market for that anymore — but I still create sports portraits for sports magazines and do fitness and sports-related work for corporations and advertising. The sports stuff I do is usually set up with some production and lighting. My business is pretty diverse, though; we spend a lot of time doing oil and gas, industrial and healthcare photography for annual reports and advertising. I’ve tried to diversify the business and not be a one-trick pony.

ASMP: For your personal projects, what piques your interest?

RS: I’ve always been interested in aviation. From a very young age I wanted to be an Air Force pilot, but I found out in high school that my eyesight was not up to par. I feel that I started this project too late — many of the great heroes of aviation have already passed on. I wanted to start this for the centennial of flight in 2003, but I had a full-time job at a sports magazine then.

ASMP: What drew you to start a project on aviators and astronauts? Why are you interested in keeping a record through portraiture?

RS: After shooting professional athletes for years, it seemed that there was a disproportionate amount of hero worship going on there: I thought it would be useful to highlight some real heroes. Most of these veteran pilots are super humble about their accomplishments, and they often say they were just doing their job. They deserve some recognition for all they’ve done. I like airplanes, and there are often interesting opportunities for portraiture when you can match up a pilot with a relevant historic plane from their past.

ASMP: How did you light the pilots? Did you have a favorite piece of portable equipment in tow?

RS: I’ve lit them in various ways, depending on the conditions and situation. We’ve used battery powered Profoto gear for the whole project though, since there are not a lot of places to plug in out on an airport runway tarmac. I’ve used the Pro-7b 1200, the AcuteB2 600 AirS and, more recently, the Pro-B4 1000 Air.

ASMP: Did you work with any institutions on this project or on your own?

RS: I’ve been very fortunate to do many of these portraits as actual editorial assignments for Smithsonian Air and Space magazine. The photo editor there has been wonderfully supportive and has helped me gain entry into the aviation world. Others I have done on my own.

ASMP: Is the project ongoing? What are your plans for the series?

RS: Yes, it is ongoing. I have 15 to 20 more key pilots and astronauts I want to photograph, but time is running out. Many of them are getting up there in age. I would love to create an exhibit and book someday if I’m able to reach enough of them.

RS: I’ve been a member for 15 years. I joined to learn about the business of photography and to prepare myself for going out on my own. The business seminars and books ASMP has produced were very valuable to me early on when I left my staff photographer job.