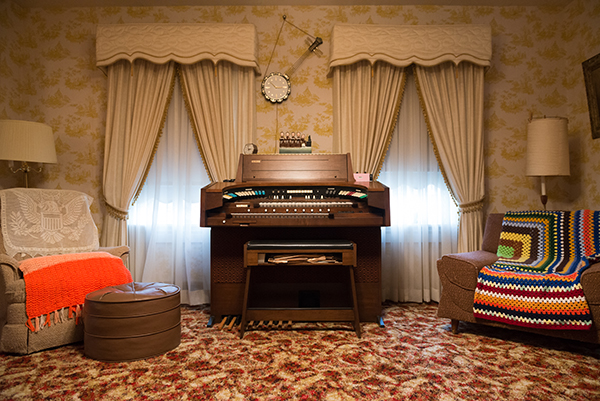 “The demographic trend in America continues to shift away from rural, small towns toward urban expansion, causing many long-held traditions and cherished institutions to disappear slowly. This loss illustrates how vitally important it is to tell this story today,” Karson says. “[The project] combines my love of small-town America and my unique sense of patriotism. [It] will increase public awareness, recognize member service, and celebrate the veteran community.”

Mariah Karson: I started my business in 2007. Specializing in editorial and studio portraiture, I strive to serve my clients’ particular needs with honesty and clarity and provide memorable images that tell compelling stories.

ASMP: What types of editorial clients do you shoot for? Have you won any other awards for your work?

MK: I have worked primarily with Le Nouvel Observateur, a French news magazine whose name recently changed to L’Obs. This is my first photography award.

ASMP: What types of stories do you want to tell through your personal projects?

MK: I make images of real people in real life settings with no digital manipulation.

ASMP: You have photographed the members of two American Legion posts, with plans for more. How did this work come about?

MK: After curating a photography show at Firecat Projects in Chicago in 2013, I was asked by gallery director Stan Klein to create a solo exhibition for 2017. To contemplate what I wanted to work on for four years, I went on a long road trip through rural Nebraska. I saw an American Legion post in almost every small town, and became curious about these veterans. I found a desire to give a face to the brave men and women who served our country and are now serving their communities.

Founded by Theodore Roosevelt, Jr. at the conclusion of World War I, the American Legion is the nation’s largest wartime veterans’ service organization. In the last twenty years, however, Legion membership has dropped from 3.1 million to 2.4 million. World War II veterans, the largest and most loyal demographic of the American Legion membership, are dying. With less than 1 percent of Americans currently serving in the armed forces, the decline of Legion membership has largely gone unnoticed by the general urban populace; small towns and rural areas feel the impact more profoundly. The demographic trend in America continues to shift away from rural, small towns towards urban expansion causing many long-held traditions and cherished institutions to disappear slowly. This loss illustrates how vitally important it is to tell this story today.

This project documents the lives of Legion members and the impact these veterans have on communities. It combines my love of small-town America and my unique sense of patriotism. This work will increase public awareness, recognize member service and celebrate the veteran community.

Already, members of Illinois Post 497 and Nebraska Post 319 have graciously accepted me into their homes. In the next year, I will work with two to three additional posts around the country.

ASMP: The series comprises both documentary-style images and formal studio portraits. Why did you choose to photograph both?

MK: This project is inspired by Richard Avedon’s In The American West and Jimmy Nelson’s Before They Pass Away, as well as my own experience working as a photographer for Le Nouvel Obsevateur. The documentary-style images tell the story of the veterans and their community, and the studio portraits serve as consistent documentation of participants of the project, as well as a “thank you” to each participant (they each receive an 8×10 print of their formal portrait).

ASMP: What are your plans for the series?

MK: “AMERICAN LEGION” will culminate with a solo exhibition at Firecat Projects in Chicago in 2017, and with a printed book of images and written accounts of the lives of the veterans and from my experience during the project.

MK: I joined in 2013 after the former chapter president, David Seide, invited me to an event called Magical Mystery Tour, a chartered bus tour of three different photographers’ studios whose identities were not revealed until our arrival.

ASMP: You chair the Fine Arts Committee for ASMP’s Chicago/Midwest Chapter, organizing events and exhibition opportunities for members. What do you enjoy most about this position?

MK: I enjoy working with my fellow directors to network with other photographers and videographers, and to connect the various photographic specialties via the fine-art community in Chicago.

MK: The most important relationship I have formed through my membership with ASMP is my relationship with the entire professional photographic community, both locally and nationally.