By ASMPJuly 25, 2016August 10th, 2017Best of 2015
No Comments
Tucker, Georgia
www.aerographs.photoshelter.com
Born to a father who was a career soldier, and later serving as a lieutenant in the U.S. Army himself, John Slemp’s personal history is steeped in the military. In a recent series, Slemp photographs veterans and their bomber jackets, which Slemp describes as “beautiful artifacts of an innocent time gone by.” 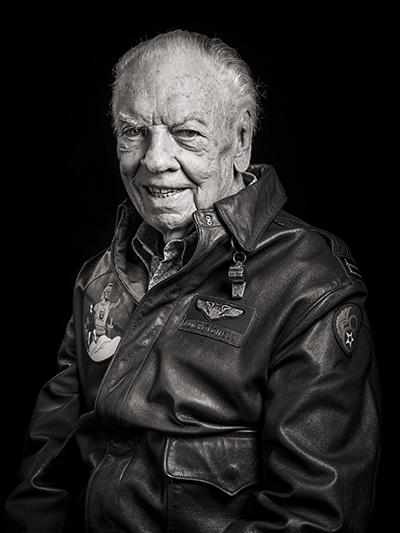 “All of the WWII veterans I’ve encountered have these great faces, full of character, wisdom and grace, earned over many years of trials and tribulations,” Slemp says. In capturing them, he attempts to preserve what they can teach us as a society.

ASMP: How did your time in the military lead to your photography career?

John Slemp: I picked up photography as a hobby in 1984 after purchasing my first camera in anticipation of a bus tour of Italy. Upon my return, I entered several images in the annual US Army – Europe photo contest, which I had never even heard of. I won First Place in the category People: Color Slides. Subsequently, I won several more awards, and the seed was planted that perhaps there might be more to this than I had first imagined.

ASMP: How did you get your start with aviation photography?

JS: Since childhood I had always been interested in aviation, and it quickly drew me in. In 2001, I was teaching an intern the Zone System, and had heard of a WWII fighter plane south of Atlanta. We went to investigate, and instead created images of a very weathered DC-3 cargo plane.

The images were well received, and I sold two large prints to a fashion photographer in town for his studio. This just increased my desire to pursue it more fully.

ASMP: What is unique about your style/approach or what sets you and your work apart from other photographers?

JS: Many aviation photographers are good at photographing aircraft, but lousy at using commercial techniques to photograph people. Having been a location “people” photographer for many years, I’ve used those skills to photograph those involved in aviation, which has been fascinating.

Like car photographers, I’m very much drawn to details of the design and form of an aircraft. I find messy or irrelevant backgrounds obtrusive and strive to avoid those as much as possible. Great light is a must too.

ASMP: What are you currently working on?

JS: Last fall I began the still-life series of WWII “bomber jackets.” I find the hand-painted artwork fascinating, but perhaps more importantly, each man’s story is compelling. When possible, I also shoot portraits and video interviews of the veterans.

The jackets are “artifacts of history” themselves, and very much lend themselves to the visual process. A number have been generously loaned from private individuals, and several museums have agreed to participate, including the National Naval Aviation Museum, in Pensacola, Florida, the Smithsonian Air & Space Museum, in Washington, D.C., the San Diego Air & Space Museum and the Planes of Fame Museum in Chino, California.

So far 15 jackets have been photographed, and the goal is to have around 50 total, perhaps as early as this fall. Other artifacts such as personal photographs, letters, log book entries, diaries and other ephemera will be included too. The aim is to produce a coffee-table book, a limited edition print set and a traveling exhibition. The National Naval Aviation Museum has already extended an invitation for the first show.

ASMP: What inspired you to start the WWII Veteran portrait series?

JS: In 2009, I was commissioned to shoot a project by Women in Aviation International. While perusing the schedule of events for AirVenture (the largest airshow in the country), I learned that several WWII WASPs (Women Air Force Service Pilots) were to attend various functions throughout the week. While photographing Debby Rihn-Harvey, an aerobatic pilot, I casually mentioned that it was a shame we weren’t making portraits of the WASPs. She whipped out her phone, made one call, and less than an hour later, the bulk of the group showed up. Since then, I’ve photographed 13 of these ladies.

As time went on, it became apparent to me that I should begin making portraits of as many WWII veterans as I could. It’s become almost an obsession, and when I can arrange it, I make portraits of those who will sit at airshows, and other gatherings. I don’t want to create portraits of these folks just because it’s currently popular to do so, but as a way of honoring their service. I think my status as a veteran goes a long way towards establishing common ground on which to stand, and there is an implied trust.

JS: I joined in September of 1993. I was still very new to the commercial photography world and wanted to learn the techniques to survive in this business. I have found that to be an ever-evolving process, but it’s much easier when you have a trusted set of peers to use as a sounding board. While the photography part of the equation is always important, the methods needed to stay in business are probably more important to learn.

ASMP: What has made you stay an ASMP member?

JS: I served for five years on the National Board and it really opened my eyes to just what the organization does on a daily basis. The organization is very well regarded in the photo world and beyond. It’s thanks to the terrific staff.

ASMP also has a very strong presence with the US Copyright Office and has lead the charge for years to increase protections afforded to photographers. They continue to recommend refinements to the registration process, and are involved internationally in bringing the rest of the world into some sort of a “standardized” business environment.

Several really terrific educational programs and webinars have been created, and the leadership has harnessed the power of the Internet to be one of the leaders in that regard. In short, I think they’ve done a marvelous job in keeping developing and established photographers informed on where the marketplace is going, and how to succeed in it.