Ashok Sinha traveled to some of the oldest parts of Calcutta, India, to photograph “Last Jews of Calcutta,” a series about a community so small they aren’t accounted for in Calcutta’s census. Born and raised through his adolescence in Calcutta, Sinha explores a community in a city that shaped his own identity. 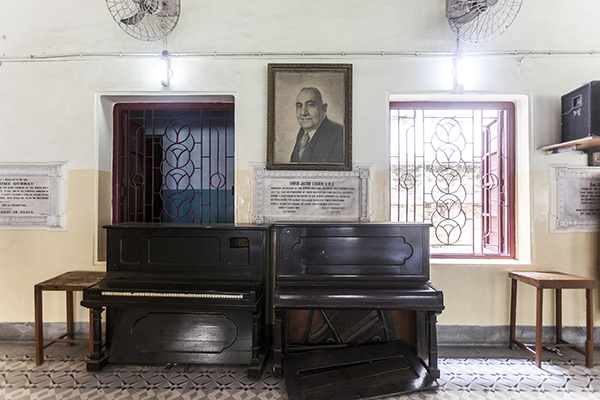 “The camera has allowed me to witness and learn a lot more about the world we live in than I could ever have imagined,” Sinha says.

ASMP: You began your career as a travel and architecture photographer in 2008, but you have been working in New York City for the past two decades. What did you do professionally before you became a photographer? What made you switch careers?

Ashok Sinha: My journey as a photographer has been unconventional. I am a creative person in general and have tinkered with various art forms until I fell in love with photography later in life. My formal education led me to a full-time corporate career in the digital-media industry. Although I excelled at what I did, I often yearned for an outlet and eventually couldn’t bear to contain my creative impulses. A year long sabbatical of traveling with my wife helped me make the leap.

ASMP: What is unique about your style/approach or what sets you and your work apart from other photographers?

AS: A lot of my work is quiet, contemplative and peaceful. My heart is in travel so often what I shoot conveys a strong sense of place, and a feeling of “being there.” In addition, I like to reveal the original character of each of my subjects, which often manifests into my choice of lighting and overall approach in setting up my shots. The aesthetic of my work has often been described as painterly and straddling the worlds of documentary and fine art.

ASMP: You have photographed in over 40 countries. What was one of the most memorable photographic experiences you’ve had?

AS: Technically speaking, my most memorable photographic experience was not in a country — it happened in Antarctica. I was overwhelmed by the raw beauty of nature and the sheer purity of a landscape that was well beyond anything I could ever imagine. I am still finishing up on producing the final set of images.

ASMP: What was the catalyst for you to make the series “Last Jews of Calcutta?”

AS: A lot of my personal work explores the notion of identity. When I was about to start working on the series “Last Jews of Calcutta,” I had completed a body of work about Muslims in China and came upon the idea to continue my exploration in a community that has shaped my own identity, namely the place I was born and raised through my early teens (Calcutta). I was pleasantly surprised to come upon the tiny Jewish community of about 20 or so people, so small that they don’t even appear in the city’s census.

ASMP: Where did you travel within the city for the series? How did you meet your subjects?

AS: I started off at the Jewish Cemetery that is located on the eastern outskirts of the city, where I met Shalom Israel, the groundskeeper at the time. He was also one of the youngest in the community and gave me a lot of information and shared contacts about the others, most of whom I eventually got to meet. I had to travel to some of the oldest parts of Calcutta where the three synagogues are located. Since most of the remaining members of the community no longer live close to the synagogues, I had to travel quite extensively within the city to meet my subjects, and the logistics of that were often the toughest part.

ASMP: What are some of the most effective methodologies you have used to give your work exposure?

AS: I believe in long-term relationships in order to bring exposure to my work. Whenever possible, I try to connect with individuals personally, be it sending a note about something very specific I want to share, attending an event or simply meeting up to chat over coffee. In addition, I do send email promotions every two months to a curated list of people I have either worked with or would like to in the future. Also, I enter notable photo contests, awards and exhibitions based on who is on the jury panel. I am also active on social media channels to a certain extent, and often create new images geared towards it, such as shooting exclusively with my iPhone to share images on Instagram.

AS: I have been an ASMP member since 2008. When I decided to make the career transition to a photographer, I knew that I lacked a network and support system. I figured joining ASMP was the best way to meet new people, attend portfolio reviews, understand industry trends and learn about the ins and outs of the business.

AS: I have met a number of photo editors, curators and producers who I have ended up working with — not to mention a few photographers who have helped to provide good insights into running my business. I have also met photo assistants through the ASMP network who I regularly work with.

ASMP: In 2011, you founded Cartwheel Initiative. What is the mission of this nonprofit organization, and what prompted you to create it?

AS: The Cartwheel Initiative works with internationally displaced recent immigrant youth from war and disaster-stricken countries who now live in New York City by utilizing art, music and film to strengthen their self-confidence, as well as build bridges within their communities and across ethnic and social divisions.

It began after a 2010 visit to Sri Lanka, when I noticed the stark difference between the pristine tourist beaches and the obvious trauma visible in northern Jaffna, where a three-decade civil war had just ended. We initially started working there with youth affected by the war by harnessing art therapeutically, sharing their experiences with the world and empowering them in the aftermath of crisis.