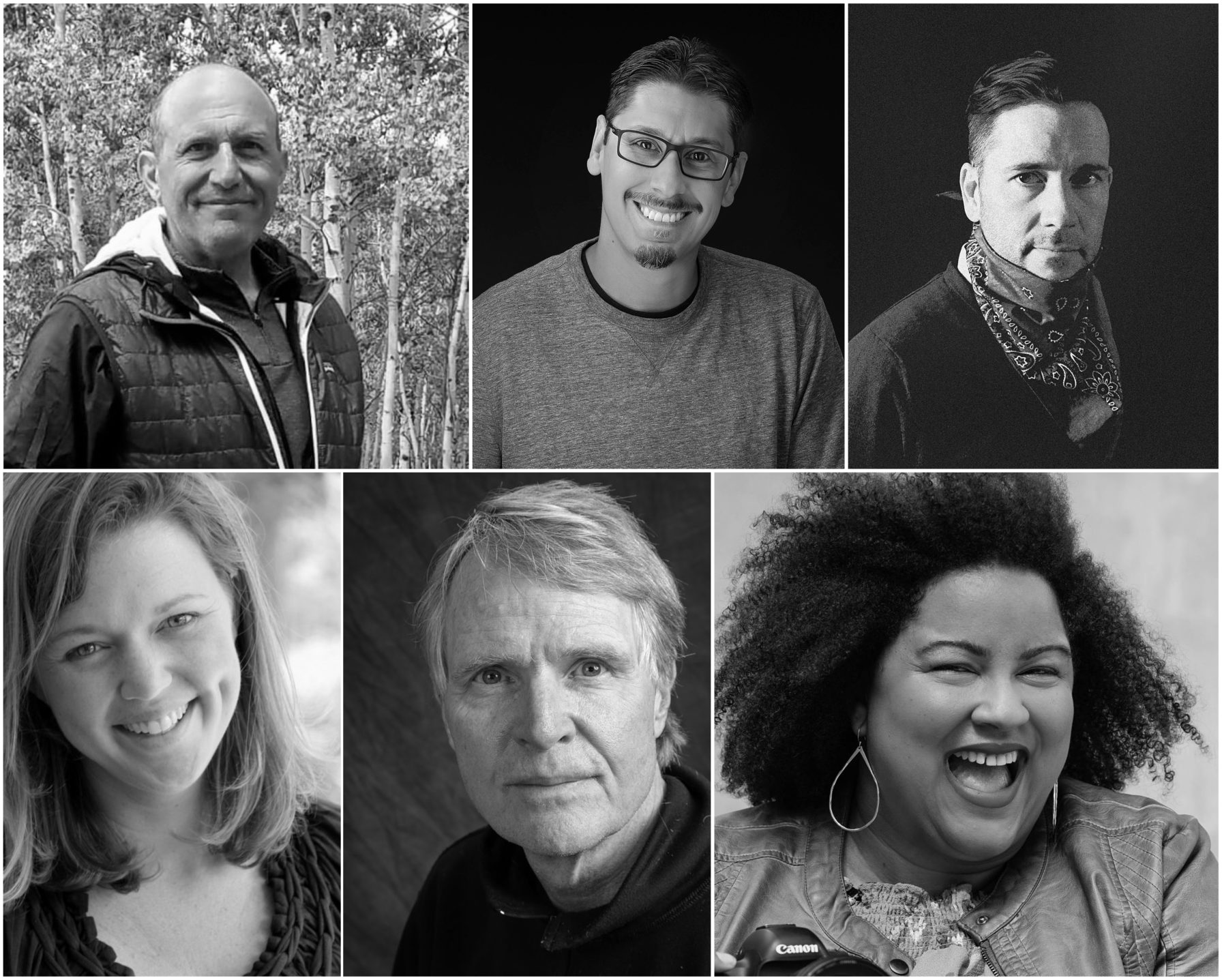 Meet our new 2021 board members: Bill Baum, Flor Blake, Greg Smith, TJ Romero, Paul Gomez and Kathryn Wagner. Welcome to the board! We are so happy to have you. Interested in being part of this amazing team of photographers, sharing your ideas and helping out? Contact us!

Bill Baum – My interest in serving on the board has developed over the last year as I’ve become more involved in the events and opportunities provided by ASMP and ASMP Colorado. I’d like to contribute to ASMP Colorado’s efforts to expand our membership, create more educational opportunities and broaden our impact on photographers in and around Colorado.

I have a varied background in photography from newspaper and advertising in the late 70’s early 80’s to sports, event, commercial, architecture, and portraits. In the early 80’s I managed the special events programs and did marketing for Eastman Kodak (both professional & consumer markets) and then Pentax cameras. Indy car, Formula One, IMSA racing, America’s Cup, Equestrian, pretty much the sports outside of mainstream NFL, NBA & MLB. Then a 17-year career as an alpine ski coach put my photo career on hold.

Since the early 2000’s I’ve been involved in sports, event and marketing photography for the United States Olympic Committee, various National Governing Bodies (NGB’s) for sports and recently the United States Olympic & Paralympic Museum. I’ve mentored photographers in the U.S. and Europe and have broad exposure to cultures and issues from travel and work in South America, Asia and Europe. Thank you for your consideration.

Flor Blake grew up in the Caribbean (the Dominican Republic and Puerto Rico) where you are automatically surrounded by color, rawness, vivacity and “flavor”, all of these elements greatly influence her work.  With a Fashion Designer as a mom, Flor grew up among fabrics, patterns, and sketches, she even stitched her fingers a couple of times when playing in her mom’s workroom.  All of this helped shape her aesthetic and gave her a great understanding of how design and the creative process in general works.

Her professional background includes all aspects of theater, documentary coordination, video production and editing, and a degree in Advertising from the University of Puerto Rico.

She loves traveling (even if it’s across the street), eating delicious food, and celebrating people’s birthdays.

Flor is based in Denver, Colorado where she lives with her wife Ileanexis and their three plants.

From high in Colorado’s Wet Mountain Valley, Greg Smith captures decisive moments of mountain life, wildlife, landscapes, the Milky Way and more, continuing a 40-year career as a photographer, editor, writer and producer for employers and clients ranging from newspapers and magazines to corporations, families and universities.

He serves on the board of directors for ASMP Colorado, as he did in South Carolina before leaving its Low-country in 2013. A former national board member for NPPA, he holds their Joseph Costa Award, a United Nations’ International Photographic Council Leadership Award, a Best of ASMP award for his 2009 documentary “Keeping the May River Wild” and two degrees in Visual Communication from Ohio University. In 2003, he coauthored “Gullah Home Cooking the Daufuskie Way” from UNC Press.

Kathryn Wagner – has been in professional photography over a decade, holds a B.F.A. in Photography & Film fromVirginia Commonwealth University, and has been published nationally with publications such as the New York Times, amongst others. Kathryn primarily photographs food and travel imagery for brands and publications.

A member of ASMP since her college days, serving on the board of ASMP Colorado is a way to give back to ASMP, an organization that has contributed so much to the growth and trajectory of Kathryn’s career.

TJ Romero – After studying Industrial Design at the Academy of Art University in San Francisco, California, I moved to Detroit, Michigan to pursue a career in photography. Being mostly self taught in this visual medium, my strong education in foundational art theory and history has enabled me to have a perspective to build upon the masters before me. While managing coffee shops throughout my educational schooling, I developed my approach to organizing the way I see our world. Now, for over 10 years, I have been a full-time professional architectural photographer, and enjoy sharing my knowledge and support to my peers using photography as the learning vehicle. The entire reason I have chosen to pursue photography as a career is because I believe in the power of a moment. This reminds me to be present in my own life while enjoying my wife, two children , and our goldendoodle. If I’m not on assignment, then I’m on my own assignment with my Olympus XA in hand, loaded with a fresh roll of HP5.

Paul Gomez – I have been a professional commercial photographer for more than 10 years and ASMP has been a good resource for me during my education and career. When Paul Trantow asked if I was interested in joining the Board, I was excited for the opportunity to help, support and give back to my colleagues and the photography industry as a whole.

Be sure to like/follow our amazing sponsors!