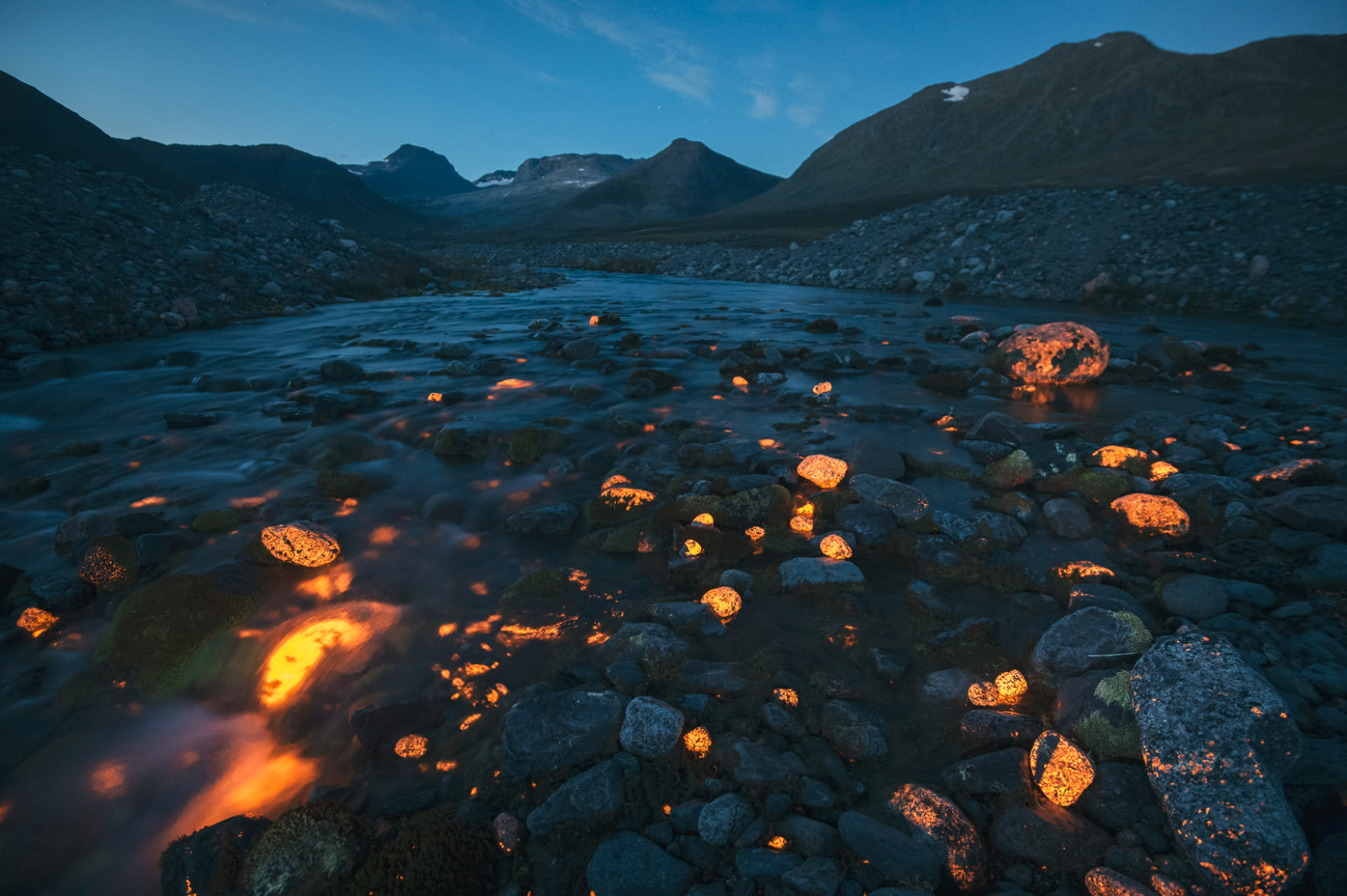 In the village of Narsaq, Greenland, rocks containing rare-earth minerals glow in the exposure of an ultraviolet flashlight. They contain minerals like neodymium, which is a finite resource used in electronics, as well as radioactive uranium. Large deposits of rare-earth minerals remain exceedingly rare outside of China, making sites like the proposed Kvanefjeld mine controversial and political. Photo ©Kiliii Yuyan

Join us as photographers Selina Roman, Kiliii Yuyan, Jesse Crosby, Stephen Chalmers, Ellyn Norris and Tya Alisa Anthony show us their personal projects in this Pecha Kucha style presentation. They’ll each display 20 images and speak for 20 seconds per slide telling us about their project. The slides change automatically, so each speaker will have exactly 6 minutes and 40 seconds to tell their story. Please join us.

Pecha Kucha means “chit chat” in Japanese. This creative method of presenting began in Tokyo in 2003, by two distinguished architects as a way to emphasize visuals over text.

Trained as a print journalist, Florida native Selina Román ferreted out stories of injustice in marginalized communities such as migrant farm workers and the poor. After working in journalism, Román spent several years at an international security and investigations firm where she became privy to the inner workings of the private-sector intelligence community. That clandestine world, rooted in surveillance, gestures and coded details, rekindled her love of photography. Her work explores ideas of femininity, perception, liminality, memory, place, and how the invisible offers more answers than what’s visible.

Photographer Kiliii Yuyan illuminates stories of the Arctic and human communities connected to the land and sea. Informed by ancestry that is both Nanai/Hèzhé (East Asian Indigenous) and Chinese-American, he explores the human relationship to the natural world from different cultural perspectives and extreme environments, on land and underwater. Kiliii is an award-winning contributor to National Geographic, TIME, and other major publications.

Jesse is a non-binary visual artist and poet, currently residing in the Midwest. They graduated from Rocky Mountain College of Art & Design with a Bachelor of Fine Arts in Photography. Their work spans a variety of mediums, including analog and digital formats, video art, and poetry; all of which speak to themes of identity, gender, memory, and place. They have been showcased in exhibitions and galleries across the United States of America, such as the Vertu Fine Art Gallery in Boca Raton, Florida, The Colorado Photographic Arts Center in Denver, Colorado, and Revolve Gallery at Ramp Studios in Asheville, North Carolina. They have recently been selected to exhibit in the forthcoming MFA Photography, Homecoming 2021 Exhibition and Publication, in Trenton, New Jersey. Jesse is presently in the process of making their first self-published monograph, Unlocking Hope, as their work continues to expand upon the essence of the human condition.
Pronouns in use: They, Them, Theirs

Stephen Chalmers has worked as a Lead Treatment Counselor to Severely Emotionally Disturbed children, worked as an Emergency Medical Technician, and taught gang children photography – informing his projects which deal with issues of loss. Chalmers has taught many workshops in alternative photographic processes and digital imaging and been a visiting artist at numerous colleges and universities. He has also been a contributor to five books (including a 2018 monograph of his work) and has been in group and solo exhibitions throughout the US and also in Australia, Ireland, British Columbia, Thailand, England, South Africa, Spain, The Netherlands, and China. Stephen Chalmers earned his MFA in Cinema and Photography from Southern Illinois University, was the NW Regional Chair for the Society for Photographic Education for two terms and  served as a member of the National Board of Directors (through 2020) for the same, was professor of Photography and Digital Media in the state of Washington for eight years and was a tenured professor of Photography in Ohio for nine years where he was also named a Distinguished Professor of Scholarship and a Distinguished Professor of Service. The work of Stephen Chalmers is in several collections including the Museum of Contemporary Photography, Light Work, Polaroid, and the Getty Research Institute and has been covered extensively by international media including National Public Radio (NPR), The British Broadcasting Corporation (BBC), The Huffington Post, Time Magazine, Pics Magazine (China), Vision Magazine (China), PhotoART Contemporary Photography Magazine (Thailand), and Stern (Germany). In 2019 he was awarded an Individual Excellence Award through the Ohio Arts Council (OAC). Selections from his projects and more biographical information can be found at www.stephenchalmers.com.

Ellyn Norris is a photographer and educator residing in San Marcos, California. Originally from Canada, “Elle” has traveled the world extensively to photograph and experience different cultures and landscapes.  She is drawn to capturing people whose spirituality has been shaped and influenced by their natural environments. To showcase her travel theme, Elle is currently working on a photo memoir book, “Elements of the Divine”. Certain places inspired her so much that she began hosting annual photography tours to Iceland, Scotland, Nepal and Croatia.

Tya Alisa Anthony, Interdisciplinary Artist + Curator, explores themes of social justice, human rights and identity. Anthony incorporates photography, collage, and sculpture to give a voice to narratives of often marginalized people as well as the social, economic, and natural environments that surround them. In her work, she is interested in reimagining histories, and in creating autonomous spaces for bodies of color.

Anthony is the Executive Director and Founder of Mahogany Vu Contemporary Art, an online thriving gallery for BIPOC, recently curated a thought provoking and socially responsible, action driven exhibit, FROM THIS DAY FORWARD, shown at the Boulder Museum of Contemporary Art (BMOCA)

Anthony received a Bachelor of Fine Arts Degree, (SUMMA CUM LAUDE) honored as Valedictorian, from Rocky Mountain College of Art + Design. Presently, Anthony lives and works in the city of Denver, producing performance, photography + installations. Tya is currently a TANK Studios artist, 2018 Redline Residency Artist Alumni and serves on the Advisory Board for Leon Gallery, a non-profit gallery and creative space dedicated to mentoring emerging artists across multiple disciplines, along with the Board of Tilt West, a non-profit dedicated to fostering critical dialog in art and culture in Denver. She has exhibited in Baltimore, MD and the Colorado region including a permanent collection commissioned by the Octopus Initiative and Museum of Contemporary Art, Center for Visual Arts, LEON Gallery, and at RedLine. Pronouns: She/Her/Hers

Inclusivity: We are an inclusive organization that provides a welcoming environment for all photographers, meaning every race, ethnicity, gender, age, sexuality, ability and religion. We are honored to have you.

If you become a member, you may take advantage of membership pricing for all our events. Learn more about the benefits of an ASMP membership.

Be sure to like/follow our amazing sponsors!