ASMP Fights for Photographers’ Rights From Overreaching Terms Of Service

Every day, we upload our lives onto social media, from pictures of our home-cooked dinner to depictions of friendly greetings to portraits of our loved ones. For the average person, it’s just digital exhaust. Yet, for professional photographers, the stakes are much higher.

Photographers upload their livelihood to social media, to build a brand and attract clients. But a large percentage of the files photographers post to platforms such as Facebook and Instagram have a potential monetary value. An increasing number of platforms are looking to keep that value to themselves by using their terms of service to assert the right to monetize user content without notice or compensation. This — coupled with an indemnification clause releasing the platform from all liability — means that creators could find themselves sued over uses for which they were not paid and over which they had no control. For these reasons, photographers need to understand exactly what their rights are for images they post to the Internet and what’s contained in the nitty-gritty legalese that most users skip over when they click agree to a platform’s terms of service.

After the popular photo-sharing company Instagram announced widespread changes to its terms of service in December 2012, ASMP’s Digital Standards and Practices chair Peter Krogh realized that this signaled a precarious situation for photographers. The new terms announced that Instagram could sell a user’s “username, likeness, photos and/or actions you take.

The move was a clear indication that the company, which was purchased eight months prior by Facebook, intended to monetize its most valuable assets — user data and the content-rich pictures uploaded to the site. The new terms set off an Internet backlash. One day after the terms were announced, Instagram went on the defensive, claiming to have removed the offending language.

“To be clear: It is not our intention to sell your photos,” Instagram co-founder Kevin Systrom famously declared.

As reported in the ASMP Bulletin’s Fall 2013 issue, shortly after Instagram released its revised terms of service, Krogh brought the document to Ross Buntrock and Jason Madden at the Washington DC-based law firm Arent Fox LLP. The duo confirmed what Krogh already suspected: Instagram hadn’t really altered its terms at all. They had pulled a bait and switch by changing the language in the terms of service, but not the rights the terms asserted. In a court of law, the revised terms of service asserted the same exact rights as the controversial, initial terms, namely to sell users’ work free of royalties.

A Campaign For Fairness

Since that time, ASMP’s Executive Director Eugene Mopsik and Krogh have enlisted the help of many other visual artists organizations, including the National Press Photographers Association (NPPA) and the Professional Photographers of America (PPA), among others, for a campaign to get Instagram to alter its current terms of service.

According to Mopsik, the key issue is fairness. The way the system is currently set up, Instagram has extensive leverage in the relationship between the user and the service. Without users pushing back, Instagram will take all of the leverage, before users even understand what they’ve given up.

“Our goal is not to have people stop using Instagram or any other social media platform, but rather to come to a mutually agreed set of terms that allows all of us to achieve the ends that we need,” Mopsik explains.

In January 2014, ASMP, on behalf of the eight other visual arts associations involved, sent an open letter to key contacts at Instagram’s parent company Facebook, outlining the issues with the terms and the three specific areas that were identified by the legal team at Arent Fox. The letter stipulated that:

Facebook responded several weeks later, rejecting these assertions and stating that (a) users do currently have the right to close their accounts and (b) the other two issues need to be written as they currently are in order to allow the service to function properly.

ASMP disagrees with this point of view. “Under the current terms, Instagram allows you to terminate your access to the material, but not their access, nor does that end the liability protection you give the company,” Krogh explains.

Basically, while you can close your Instagram account, you can’t prevent the service from using your data or photos at a later date, say to sell to advertisers or other companies. And if their use of this content infringes on rights or sets off a lawsuit, the person who initially posted the content will be liable, thanks to an indemnification clause that clears Instagram from any legal liability.

This indemnification clause is one of the most egregious oversteps by Instagram, according to Mopsik. The company’s legal department argues this clause is necessary to protect the service from users posting photos to which they don’t own the copyrights. While that would be perfectly reasonable, the terms actually go much further than that, protecting Instagram from lawsuits arising over third-party uses over which the copyright owner and/or user has no knowledge or control.

The direction of these terms of service points toward a more expansive set of rights for Instagram, and it’s not hard to guess why. “They write the terms to give them the greatest possible flexibility, with the least possible enforcement effort,” explains Mopsik. “They don’t want to jump through hoops to get the rights that they want.” 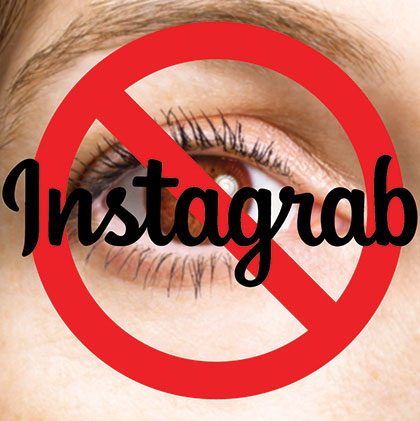 Instagram’s most valuable asset is the content created by its users. Photos are in more demand now than ever and Instagram has access to a vast, and potentially lucrative collection. Thanks to the current terms of service, they could sell every photo and not pay a dime to its creators.

There is nothing in the Final TOU that would stop Instagram from deciding to become a stock photo agency, a publisher, or a broadcast service, and use the personal or brand identity that the license grants to Instagram without the threat of incurring liability. Instagram’s freedom to unrestricted sublicensing starts treading dangerously close to exploitation when considered in this context.

It’s a scary proposition and it’s happening now. Over the past year, Instagram has quietly made photos available through their API (application programming interface). These photos may be used for free by small entities, and are available for a fee to larger companies. We’re starting to see Instagram-based marketing campaigns from big companies. They aren’t selling the water — your photos — just access to the pipes.

Krogh thinks it’s highly unlikely that Instagram will stop there. Without pushback from users and professionals, Instagram will slowly become what many fear it will (and what many companies want it to become), a provider of editorial and advertising content for which only Instagram will benefit.

“Instagram has begun to distribute content, turning on the stream slowly at first. We’re seeing it used for non-commercial content and editorial uses, and in some cases for marketing. Soon, I think we’ll see it as full-blown advertising, although it’s a different kind of advertising than traditional print media.” says Krogh. “They are going from the least controversial to the most expansive use. They’ll keep pushing the model until people push back.”

How To Fight The Over-Reach

According to Mopsik, Kuwayama agreed with Mopsik on a number of points, most notably, that if Instagram sees a significant payout from selling users’ photos, users should see a cut. However, as Mopsik reminded, Kuwayama was speaking his personal opinion, not company policy. It’s highly unlikely that Instagram will give up a piece of the pie so easily.

Mopsik is currently scheduled to sit down with Instagram’s legal team to talk through the issues raised by ASMP. If that shows no movement — and Krogh is not optimistic that it will — ASMP may start a grassroots social media campaign to alert Instagram’s users, both professional photographers and laymen, of the issues with the terms. According to Krogh, enlisting the general public is likely the best option for driving change.

For now, the best thing photographers can do is to be aware of their current rights in posting images to social media. As Mopsik says, “the stakes are just too high” for photographers to stay out of social media completely.

In December 2013, ASMP’s Business as unUsual Webinar, Social Media Risks & Rewards, featured Peter Krogh and ASMP past president Richard Kelly in a discussion about how to develop a social media strategy to promote your photography business, without sacrificing control over your content. As they explain, it’s about taking a more nuanced approach to what it means to be a photographer in the social media age.

“Be strategic with what material you upload to those services,” says Krogh. “If you want to use those services to promote your services, use them to promote what kind of stuff you’re working on, where you’re going, who your clients are.” Then he warns, “Don’t put the crown jewels on social media.”

ASMP’s Business as unUsual Webinar series provides professional photographers with expert business information through one-on-one conversations and audience Q&A’s with industry professionals, observers, and futurists. To view Social Media Risks & Rewards as well as the other Webinars in this series, visit Business as unUsual.