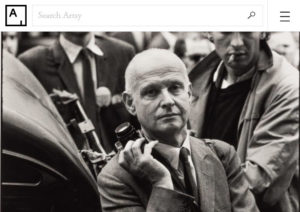 Cross-posted from Artsy. [By Jacqui Palumbo]

“In the early 1930s, Cartier-Bresson encountered Three Boys at Lake Tanganyika (1929) by Martin Munkácsi: an image of three young children, nearly silhouetted, running into the crashing waves. ‘It is that very photograph which was for me the spark that set fire to the fireworks and made me suddenly realize that photography could reach eternity through the moment,’ he once recalled.

In subsequent decades, Cartier-Bresson became a war documentary filmmaker, an accomplished photographer for magazines including Life, and a co-founder of the influential picture agency Magnum Photos. Toward the end of his career, Cartier-Bresson cut ties with Magnum to return to drawing and painting. ‘Photography is an immediate reaction, drawing is a meditation,’ he once described of his dual practices.”