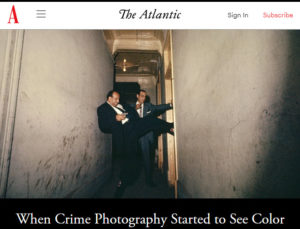 Cross-posted from The Atlantic
[by Bill Shapiro]

In 1957, Life magazine sent one of its star photographers on a sprawling assignment: six weeks in four of America’s biggest cities to capture scenes of urban crime. The photographer was Gordon Parks, for 20 years the only black photographer on Life’s staff, and he later described the assignment like this: “I rode with detectives through shadowy districts, climbed fire escapes, broke through windows and doors with them. Brutality was rampant. Violent death showed up from dawn to dawn.”

The story, titled “The Atmosphere of Crime,” was both prescient and incisive, the text that accompanied it a systematic dismantling of the dubious statistics that fueled white Americans’ growing sense that an immense crime wave was upon them. And Parks’s pictures? Cinematic, intense, and exquisitely composed, they did nothing less than revolutionize what a “crime photo” could look like. But they also exposed issues that would animate mass protests years later: the trip-wire tension between race and law enforcement, the relationship between poverty and mass incarceration, the gulf between what we see and what we think we see.

Although Parks returned with more than 300 pictures, only 12 were used to illustrate the Life article. A new photography book, The Atmosphere of Crime, 1957, revisits the assignment and includes 47 outtakes from Parks’s original shoot—pictures that have never been published before. These are not only the most beautiful crime photos you have ever seen, but, quite possibly, the most important.