The Trench Coat: Through Magnum Images 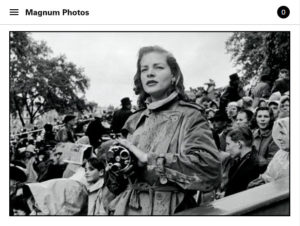 Cross-posted from Magnum. [By Rosalind Jana]

“A trench coat is a garment best worn on a gloomy day. Ideally with the collar turned up, or a gust of wind lifting the hem. If it’s raining, all the better. In Robert Capa’s photo of Lauren Bacall, at the coronation of Queen Elizabeth II the actress, too, looks regal: protected from the worst of the elements by her practical coat, the damp patches across her shoulders and arms somehow adding to her look rather than diminishing it. The trench coat assumes its rightful use, too, in Inge Morath’s photo of model Nancy Berg hastening away down New York’s 5th Avenue, Berg’s silhouette partially reflected in the rain-slicked tarmac.”

“Even when the skies haven’t opened, the trench coat often finds itself accompanied by hunched shoulders and hands dug deep into pockets. David Hurn’s photo of two fashion models on a desolate stretch of shingle, power stations receding behind them, is all the more evocative for the motion of windswept hair and robust fabric. Raymond Depardon’s portrait of Wim Wenders achieves similar atmosphere as the German film-maker stares out over Venice’s moody waters. Elliot Erwitt’s image, too, of a woman rushing past with head bent forwards suggests a bitingly cold day. It’s a posture echoed in reverse, both in the tilt of the subject’s chin and the camera’s focus on a single, lined hand clutching a bag, in Peter Van Agtmael’s portrait of a solitary woman in Los Angeles. In this photo the weather is harder to read, but the image’s emotional temperature remains somewhat desolate.”

The Trench Coat: Through Magnum Images