‘Take Beautiful Pictures of Our People’ 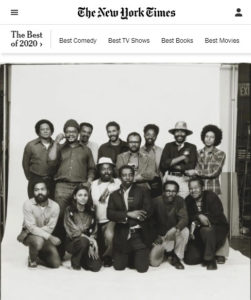 Cross-posted from The New York Times and Twitter thread. [By Siddhartha Mitter and John Edwin Mason]

“Born in 1960s Harlem, the Kamoinge collective was influential in Black photography but ignored by the mainstream until recently. This exhibition should change that.”

“Influential in Black photography circles, Kamoinge is little-known beyond. “Working Together: The Photographers of the Kamoinge Workshop,” now at the Whitney Museum after originating at the Virginia Museum of Fine Arts, is the first museum show focused on the group since the 1970s.”

“When [Gordon] Parks began his photographic career, in the late ’30s, there were no Black photographers on the staffs of white newspapers and magazines. Black freelancers had the door slammed in their faces. The same was true in fashion & commercial photography.

…Call him the Jackie Robinson of photography.”

‘Take Beautiful Pictures of Our People’