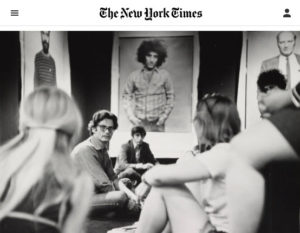 Cross-posted from The New York Times. [By Dwight Garner and Philip Gefter]

“The celebrated photographer made striking group portraits that he hoped would signal a new level of rigorous intention. Why didn’t the art world notice?”

“In the mid-1960s, three of Richard Avedon’s closest friends reached Olympian heights in their respective fields: Truman Capote published ‘In Cold Blood,’ an overnight best seller that would forge a new genre in literature; Mike Nichols received an Academy Award nomination as director of ‘Who’s Afraid of Virginia Woolf?’; and Leonard Bernstein won a Grammy for his ‘Third Symphony (Kaddish).’ Their achievements cast Avedon’s own career in stark relief. He may have been the most glamorous photographer in the world, but in the context of film, literature and classical music, he was still only a fashion photographer. It irked him, too, that his portrait work was considered ‘celebrity photography.’”

Richard Avedon, a Photographer Who Wanted to Outrun the Glitz Factor