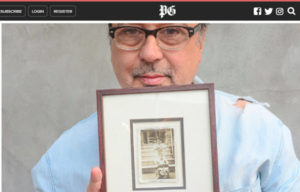 Cross-posted from the Pittsburgh Post-Gazette
[by Rafael Alvarez]

Let’s dream about something, as Gene Smith might have done as he took 17,000 photographs of Pittsburgh back when Ike was in the Oval; something more miraculous than a white Christmas.

What if, in this season of giving, the fates allowed you to bestow anything — and I mean anything — upon one person? Who would that person be? And what might you give them?

“Give blood,” sang Pete Townshend once upon a time, “and some will say it’s not enough…”

W. Eugene Smith, one of history’s great photographers, would have been 100 next week, born on the 30th of December in Wichita, Kansas. He died in Arizona in 1978 after a series of strokes.