By ASMPAugust 24, 2020ASMP Legends
No Comments 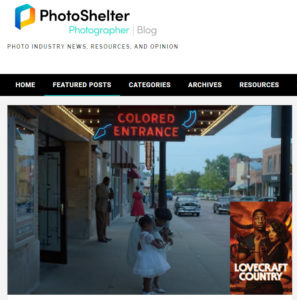 When HBO’s Lovecraft Country premiered last weekend, sci-fi and photo nerds reveled at the detailed homage to several photos taken by the legendary photographer, director and author Gordon Parks. While best known for “American Gothic,” much of Parks’ work throughout his lifetime touched upon the U.S.’ ignominious, racist past – work that has entered the contemporary consciousness through pop culture appropriation.

Based on the 2016 novel by Matt Ruff, the series occupies a fascinating intersection of H.P. Lovecraft’s mythology amid the racism of the 1950s. Showrunner Misha Green recreated two of Parks’ still photos into moments into which the main characters intersect history.