By ASMPAugust 5, 2020ASMP Legends
No Comments 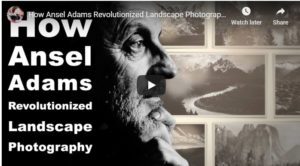 “Billions of pictures are being posted and shared on the internet every day. There are more cameras than people in the world nowadays. Photography is something we take for granted; something we can easily do whenever we want. But it wasn’t always like this. On April 10th, 1927, a photographer climbing to the Diving Board in Yosemite just reached the destination to photograph the Half Dome. After the all-day-long hike with his heavy tripod camera, Ansel Adams only has two glass plates left to take exactly two shots to capture what he sees. He carefully composes and takes the shot. But then something happens.  He realizes the camera is not going to capture what he is feeling at that moment; how he visualizes the shot. With the last plate in his hands he makes a decision.”