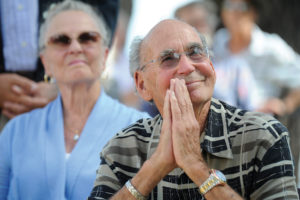 Cross-posted from the Santa Barbara Independent
[by Jean Yamamura]

Ernie Brooks II, the famed under-ocean photographer, died today at the age of 85. Photography was in his blood as the son of the man who created the Brooks Institute of Photography in Santa Barbara and the grandson of a Portuguese woman who was a professional portrait photographer.

Brooks not only graduated from his father’s institute and studied with Hans Haas, a pioneer of underwater documentaries, but he established the school’s underwater photography courses and was one of its champions during difficult financial times. The school was sold in 1999 and closed in 2016.

As a pilot with the U.S. Air Force as a young man, Brooks flew across the world, meeting Jacques Cousteau in Africa where his boat the Calypso was being built. They worked together for 17 years, traveling the world as Brooks trained his photographers.