By ASMPAugust 20, 2020ASMP Legends
No Comments 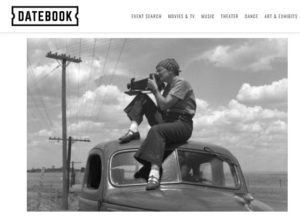 Cross-posted from The San Francisco Chronicle
[by Tony Bravo]

Poverty and racial marginalization, internment camps, and life during wartime — these are among the most famous themes documentary photographer Dorothea Lange chronicled in her groundbreaking 20th century career.

From her iconic images of migrant farmworkers in the 1930s to her photographs showing Japanese Americans in government-enforced “relocation centers” during the 1940s, Lange wasn’t afraid of shining light on America’s darker realities. As the country continues to grapple with similar struggles, the time feels right to revisit Lange’s work in a new online archive that debuted earlier this month from the Oakland Museum of California.

Drew Johnson, the museum’s curator of photography and visual culture, says that even in Lange’s own lifetime, her work was constantly being rediscovered as the same social issues persisted.

“Lange gave a wonderful oral history to UC Berkeley before she passed,” Johnson recalls of the artist, who died in 1965. “She said, ‘Someone showed me photos of migrant farmworkers they had just taken. They look just like what I made in the ’30s.’”