A to Z of Photography: Weegee and Wet Plate Collodion 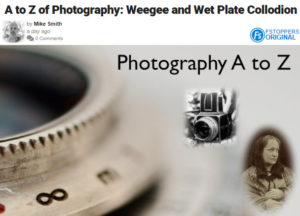 Cross-posted from FStoppers
[by Mike Smith]

The cult of celebrity is alive and kicking, now seemingly the domain of the “influencer”. However history is littered with photographers who attained celebrity status — step back 80 years and Weegee made the unusual step from press photographer to, well, influencer! This was long after the second of our two articles, which looks at the wet collodion plate process.

Weegee was a New York press photographer who assumed near-mythical status because of his uncanny ability to be the first on a news scene, along with his unflinching tabloid images depicting crime, injury, and death in Manhattan’s Lower East Side.

Born Ascher (later Anglicized to Arthur) Fellig in 1899 (Zolochiv, Ukraine), his family emigrated to New York in 1909. After a variety of street jobs, he joined the Acme Newsroom as a darkroom technician and this is possibly the original source of his pseudonym — Squeegee Boy. The name was later transcribed into Weegee — a phonetic spelling of ouija — referencing his unnatural ability to be at a news scene before the police!