Trees: Between Earth and Heaven by Art Wolfe 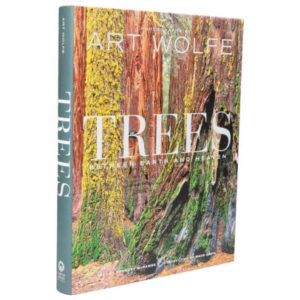 Cross-posted from The Sierra Club
[by Austin Price]

In his new book, Trees: Between Earth and Heaven (Earth Aware Editions, 2018), photographer Art Wolfe turns his lens to the woody and fibrous, carbon-sequestering perennials that define so many landscapes around the world. The book includes flat-topped acacias in the African savanna, towering spruce and cedar wrapped in moss, twisting and twining koas and banyans, and giant sequoias covered in snow.

But to an artist like Wolfe, trees represent much more than the sum of their parts. “There’s a sacredness in forests that is unlike any man-made structures,” he says. Or as ethnobotanist Wade Davis writes in the introduction to the book, trees are “living entities, points of inspiration, and metaphors to propel our lives forward.”

In Trees, Wolfe works with writer Gregory McNamee to present a portfolio of tree photography from a decades-long career. Wolfe has been a professional photographer since the 1970s, shooting assignments for magazines like National Geographic and Smithsonian and dozens of books. Since 1989, he has published at least one book a year (including one from Sierra Club Books in 1993). His subjects range from migrating species to rainforest ecosystems and places like the Himalayas and his native Pacific Northwest, where he first developed a particular love for trees.