Marching to the Freedom Dream by Dan Budnik 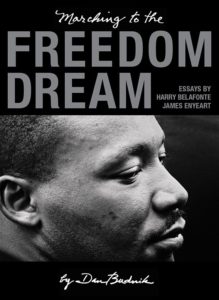 In August 2014 Marching to the Freedom Dream was published by Trolley Books in London. The book shows Dan Budnik’s significant body of work documenting three seminal marches of the Civil Rights movement, between 1958 and 1965. The publication coincided with the 50th anniversary of the Civil Rights Act of 1964, and precedes the 50th anniversaries of the Selma-Montgomery March and the Voting Rights Act in 2015. With the introduction written by the prolific civil rights activist, Harry Belafonte, an essay by the American photohistorian James Enyeart and an afterword by Dan Budnik. The first copies were presented during a festive book signing at the Photographers’ Gallery in London, August 7th 2014. It was followed by the book signing at the International Center of Photography in New York City, September 2014.

Editor’s Note: Dan Budnik was an ASMP Life Member out of the Tucson Chapter.