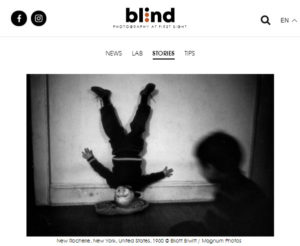 Cross-posted from blind. [By Christina Cacouris]

In his latest book, ‘Found Not Lost,’ Erwitt forgoes the type of imagery that initially made him famous in favor of more contemplative work, most of which has never been seen before. Now in his nineties, Erwitt spent two years digging through his entire photographic archive and examining thousands of images, breathing new life into the formerly rejected. In writer Vaughn Wallace’s introductory essay, he describes a note scrawled on a scrap of paper found nestled in the piles of negatives: “Don’t bother, pix useless,” it read. Some of those very photographs, once cast aside, are now printed for the first time in ‘Found Not Lost.’