All Available Light: The Life and Legacy of Photographer Ted Polumbaum 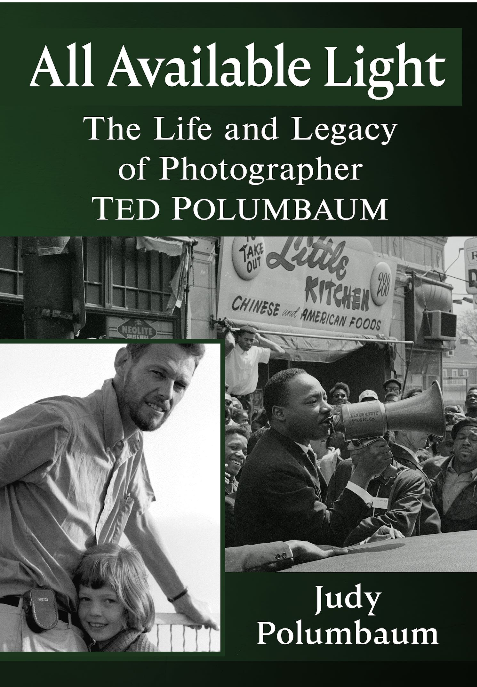 The life, work, and enduring legacy of a social activist-photojournalist as reconstructed by a daughter.

Over his highly successful four-decade career as a freelance photojournalist, Ted Polumbaum did about 400 assignments for the legendary LIFE magazine, on subjects ranging from politics, religion, science and medicine to natural disasters, sports, and the arts. He also worked regularly for Time, Fortune, Sports Illustrated, Look, The Saturday Evening Post, The New York Times Magazine, Ladies Home Journal, People, Time-Life Books, and many other publications.

Yet he never planned to be a photographer. That destiny was thrust upon him after he was blacklisted from news reporting.

ALL AVAILABLE LIGHT: The Life and Legacy of Photographer Ted Polumbaum (McFarland Press, Fall 2021, print ISBN: 978-1-4766-8660-8, e-book ISBN: 978-1-4766-4407-3) sheds light on Ted’s life, livelihood, and the times in which he lived and worked. Drawing on personal letters, family anecdotes, travel records, interviews, historical research, collective memories, and the vast archive of images her father left behind, his daughter Judy presents the story of a man of remarkable courage, conviction, and compassion who was also a gifted photographer and a devoted dad.“

As a photojournalist, my father bore witness to movements for peace and justice over nearly half a century,” Judy Polumbaum writes. “As a citizen-dissident, he acted upon his conscience and beliefs. As a man both of and ahead of his times, he saw much progress, but never enough.”

In the spring of 1953, ten years after being drafted out of his freshman year in college to go to war and five years after finally earning his BA in History from Yale as an Army veteran, Ted Polumbaum was focused on his budding career in news (at the time, he wrote the late-night television newscast for United Press in Boston) and his growing family. He and his wife, Nyna, had one daughter, with a second (Judy) on the way. McCarthyism was still riding high, and Ted was summoned to Washington DC to face the House Un-American Activities Committee (HUAC) at hearings into “Communist subversion in education.” At Yale, he’d joined the John Reed Club, one of the many innocuous progressive organizations targeted by the inquisition. The inquisitors wanted him to name names.

Challenging HUAC’s right to inquire into his personal or political beliefs, Ted took the Fifth Amendment and chastised the congressmen for trampling on the Bill of Rights. His defiance cost him his job. Unemployed, blacklisted, and needing to support a wife and two kids, he returned to a childhood hobby: taking pictures.

Filled with both well-known and never-before-published images from Ted Polumbaum’s professional and family archives, ALL AVAILABLE LIGHT revisits key assignments and experiences that shaped Ted’s political views and commitment to social justice.

Along with celebrating Ted Polumbaum’s work, Judy Polumbaum opens a window into her father’s strained relationship with his domineering father, a longtime tobacco company executive who lost all his wealth and died a pauper; his loving marriage to kindred activist Nyna; the challenges of raising his first daughter, Miki, diagnosed with autism at a time when few were familiar with the term; and the later pain of watching his second, adored daughter Judy battle anorexia. The book also explores how Ted squared his political involvements with the requisites of his occupation – the photojournalist, like the journalist, was supposed to remain “objective” and impartial. “To the extent possible, Ted separated his livelihood from his opinions. On assignment, he was a keen, alert observer, with specific tasks to fulfill. As himself, with or without cameras, he could be an interested party, an affected soul, a participant.”

Ted Polumbaum died in 2001, before the terror of 9/11, after battling a baffling brain ailment that only recently has begun to be understood. He was 76. After his death, his widow Nyna donated his archives to the Newseum – best known for the great museum of news on the Washington DC mall that closed at the end of 2019. The Newseum’s collections endure, however, as online programming, traveling exhibits and other activities continue; and the Ted Polumbaum archives remain the organization’s single largest holding by an individual photographer.

A tribute to a great photojournalist and the historic images that outlive him, ALL AVAILABLE LIGHT also is an intimate portrait of an exceptional father and a true patriot. The verdict is clear, inspiring, and all the more relevant today: “Ted was an American through and through. His patriotism had nothing to do with bigotry, chauvinism, superiority, or domination. His loyalties lay in conscience, and in willingness to go against conventional wisdom when conscience dictated.”

Pre-order the book from McFarland Books

ASMP Member Judy Polumbaum is professor emerita in the University of Iowa’s School of Journalism and Mass Communication, where she taught for nearly three decades. A longtime writer and scholar of China’s mass media, she was the first Western researcher to do fieldwork focusing on post-Mao journalism in mainland China. She now makes her home in Nevada with her husband and two canine comedienne Beagle rescue sisters. For more information about Judy, visit her site.

Prepublication praise for All Available Light: The Life and Legacy of Photographer Ted Polumbaum

“Do yourself a favor and read the highly original All Available Light, which is really three books in one, each of which deepens one’s understanding of the others: A loving daughter’s memoir of her late father; a Cold War account of the courage it took not to name names during the McCarthyite years (which he didn’t); and anerudite but easily accessible account of how a caring photographer goes about making the images that are still very much still with us.”—Victor S. Navasky, author of Naming Names, former editor and publisher of The Nation

“All Available Light is a riveting memoir of the Red Scare and one of its little-known targets, an inspired tale of a man who fought back and won, a daughter’s touching tribute to her dad, and a story for our times as well as Ted Polumbaum’s.” —Larry Tye, author of Demagogue: The Life and Long Shadow of Senator Joe McCarthy

“A daughter’s beautifully-rendered story of her father, who had the courage to challenge American demagogues, a virtue that remains every bit as essential today.” —Peter Beinart, New York Times contributing opinion writer and Jewish Currents editor-at-large

“This book is packed with the joys and sorrows of a family. It is an ode to Ted Polumbaum, who addressed social ills and human struggles with his camera. He used pictures as bricks on the yet-to-be-paved road to peace.” —Binnie Tate Wilkin, author of A Life in Storytelling, co-founder of American Library Association Black Caucus and member of California Library Hall of Fame

“All Available Light is more than a book. It is an essential guide on how to live a life with purpose and unshakable principles. Fired and blacklisted from print journalism when he refused to sell out others before the House Committee on Un-American Activities, Ted Polumbaum became a freelance photographer, and the book contains riveting photos from the civil rights and anti-Vietnam War movements. Judy Polumbaum’s exceptionally well-written and inspirational memoir of her father shows the importance of what it means to be a citizen-dissident in America.”—Stephen C. Terry, author of Say We Won and Get Out: George D. Aiken and the Vietnam War