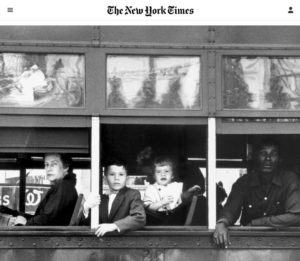 Cross-posted from The New York Times. [By Arthur Lubow]

The cover of “The Americans,” Robert Frank’s revolutionary and influential book, is “Trolley – New Orleans,” a photo of a group of white and black people looking out towards the photographer from a streetcar. Lubow, the Times’s photography critic, takes apart this iconic image, in increments, to see what it tells us about America then and now. Hint: not much has changed.

“Dead center we see the future — two white children, presumably brother and sister, with a dark presence looming in the background. Could it be their black nanny, who will take a seat in the “colored” section just behind them? New Orleans streetcars had movable barriers, to adjust to the racial make-up of the ridership at any time.”

Editor’s Note: The late Robert Frank was an ASMP Member.